By NICOLA NEGRI
August 1, 2016
Sign in to view read count 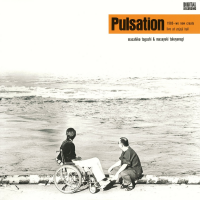 Virtually unnoticed in the West, the Japanese free jazz scene in the 1970s was bursting with creativity. The musicians shared a strong sense of adventure, as they welcomed the developments of creative music and free improvisation from USA and Europe while trying to find their own voice with a completely personal approach to improvised music. One of the main protagonists of that season was Masayuki Takayanagi, a strikingly original guitarist and musical thinker with a strong passion for both mainstream jazz and extreme noise. A generation younger but equally important was Masahiko Togashi, a drummer that, also due to an accident that forced him on a wheelchair after 1970, developed a unique approach to drums and percussions, using silence as an integral part of music making.

Originally released by Paddle Wheel in 1983, Pulsation documents a live concert at Zojoji Hall in Tokyo, and is the first record Togashi and Takayanagi made as a duo, even if they had worked together since the 1960s. The record is divided in two tracks ("Inner Pulsation" and "Outer Pulsation"), each one about 22 minutes in length, mirroring the original LP sides. The performance can be regarded as a single piece though, with a clearly symmetrical structure, even if the musicians cover much musical ground over the course of the album. The opening and closing sections are reserved to Togashi, that alternates between deeply resonating gongs and a relentless activity on the toms. Takayanagi enters the picture with sparse scratching sounds, slowly building an intense dialogue with the drummer, moving through a series of sections characterized by different approaches to both acoustic and electric guitars, with bowed strings, fast arpeggios, rumbling drones or heavily filtered electronic sounds, often opting to treat the guitar as an object to be manipulated more than a proper musical instrument. Throughout the performance Togashi tries different colors on the drum kit, adding bells, chains, shakers and tin cans, always returning to the toms in a mostly arhythmic percussive activity that maintains an intriguing, almost ritualistic dimension.

The extreme abstractness of the music guarantees many possibilities, but the main themes here are pure sound and space, investigated through a massive use of silence, ever-changing dynamics and slow structural developments unfolding with a mysterious musical logic. The improvisational process is always on full display, with the musicians constantly listening and responding to each other, and when the music opens up to more readable materials the effect is powerful: a few seconds of melodic statements from the guitar have the impact of a fully formed solo; a couple of minutes of insisting patterns on the drums achieves an almost hypnotic effect.