By DAN MCCLENAGHAN
November 10, 2019
Sign in to view read count 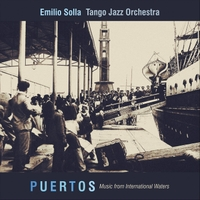 Tango music was born in the late nineteenth century in the ports along the shore of the Rio de la Plata which flows to the ocean along the border between Argentina and Uruguay. A sound of the poorer locales, it was a melting-pot music, drawing from European, Native American, Spanish-Cuban, African and Argentinian folk music influences. The very early twentieth century saw a "tango craze," with this working class music bubbling up out of the slums to gain respectability in traveling tango orchestras touring the capitals of old Europe and eventually New York.

Then there was Astor Piazzolla (1921-1992), the Argentinian bandoneonist who revolutionized the artform during a career begun in the 1950's and continued until his death in 1992. His contribution came to be called Tango Nuevo. His legacy lasts and, in 2002, pianist Emilio Solla dipped into that legacy and released the superb tribute, Suite Piazzollana (Blue Moon Records), in honor of the maestro. A handful of Solla's distinctive tango jazz recordings have followed, featuring different-sized ensembles, culminating—for now—with Puertos: Music From International Waters.

Solla's modern take on the tango is a sweeping, surging, often majestic sound. It has everything: passion, grandeur, beauty, lilting grooves, driving rhythms, and a multiplicity of inspired soloing.

The opener, "Sol La, Al Sol" exudes a propulsive, Afro-Cuban mambo vibe. "Llegara, Llegara, Llegara" is, arguably, the set's tour de force—although there are several tunes that could compete for the title. It is an expansive odyssey, with layered harmonies and a gorgeous jumble of percussion, featuring an intricate and exhilarating solo from pianist Arturo O'Farrill (the son of famed bandleader Chico O'Farrill).

"Chakafrik" speaks to the city of Benguela, an Angolan port which was the source of human cargo during the slave trade. "You can't make an album with jazz and tango without recognising the importance of Africans in the Americas," Solla says. It is an ebullient tune featuring a searing alto sax solo by Tod Bashore.

"Four For Miles" is a second nominee for the tour de force prize. It begins with a Gil Evans vibe that segues, about five minutes in, to an ominous funk sound that would be at home in one of the Miles Davis / Marcus Miller collaborations, Tutu (Warner Brothers, 1986) or Amandla (Warner Brothers, 1989).

This is music for the heart and soul and, of course, for the feet—for those who dare to attempt to dance the tango. It is a triumph. Puertos: Music From International Waters is the finest recording in the Emilio Solla discography to date.