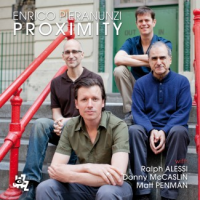 Enrico Pieranunzi is the senior statesman of mainstream jazz piano in Italy. His recording career goes back to 1975, with more than forty albums on such labels as Soul Note, Enja, Egea and currently CAM Jazz. His music is romantic, lyrical mainstream using lush arrangements and harmonies. The current group could be termed his "American" quartet, with saxophonist Donny McCaslin (on tenor and soprano saxophones), stylistically wide-ranging trumpeter Ralph Alessi (on trumpet, cornet and flugelhorn) and bassist Matt Penman bringing Pieranunzi's compositions to life.

The drummer-less quartet's integration is remarkable as Pieranunzi shifts back and forth between harmonic/rhythmic support and soloing. Alessi and McCaslin both pay close attention to what is going on and play within the sound and atmosphere established by Pieranunzi and Penman. As an aside, Alessi's flugelhorn and McCaslin's soprano sax sound very similar at times, further integrating the players together. Penman's role is very important since he supports both the harmony and rhythm.

The overall feel of Proximity could be described as hard-edged Italianate romanticism with varying amounts of lushness, melancholy and intellect on each track. Pieranunzi's compositions are immediately accessible, with many beautiful melodies and harmonies, but this "mainstream" side of the music is balanced and deconstructed many times by subtle dissonances and structural feints which pique the ear. The music always has a distinct direction and forward motion which is created by the meshing of relatively clear harmony and rhythms. However, on top of this solid structure, the soloists (including Pieranunzi) exhibit a freedom which, however, feels completely natural and not forced —hence the descriptive phrase "seriously playful" or its reverse "playfully serious" feels extremely apropos.

The title tune opens with a melodic declamation that oozes Italy (somehow), mixing the romantic with the evocatively dangerous. This then breaks down into free playing of each member of the group, which, nevertheless, sounds cohesive —"Proximity" thus describes their close interaction. From there the piece moves to a fantastic duo between piano and bass, leading to a remarkable solo by Penman. McCaslin and Alessi rejoin with eerie high lines that overlap and intersect. Finally, there is a recap of the tune in quasi unison as in the opening. Simply put, this is a perfect track which shows everyone's (and the group's) strengths.

The next track, "Within The House Of Night" opens sparsely with just bass and sax playing another "Italianate" romantic melody. Alessi answers, supported by the piano, followed by the Penman playing the melody, which is answered by McCaslin and Alessi in harmony -gorgeous, with a bit melancholy. The second half opens with solo piano, and demonstrates Pieranunzi's exquisite touch, followed by McCaslin practically crying with his horn and answered by the bass and piano. The title is very descriptive of the musical imagery —walking alone at night in a possibly empty house, or at least alone with one's thoughts; a deeply moving track.

The album ends with "Five Plus Five" as Alessi and McCaslin play the boppish theme in unison, with nice counterpoint from Penman. Alessi's solo is very stretched bop accompanied by Pieranunzi playing inside the piano with more sharp Penman, adding the feeling of danger. McCaslin takes over Alessi's line and everything slows down as he does his thing —what a line! Who needs drums? Penman then leads to the recap, making this track an excellent example of that overused label, 'post bop.'

Pieranunzi knew what he was doing in picking McCaslin, Alessi and Penman. Each player's style, while different from each other, fits perfectly with Pieranunzi's overall style; they are clearly being themselves, yet just as clearly are working within the framework of the pianist.

Proximity is just about the perfect album— easy to listen to, but with such deep composition, arranging and playing that it will not leave the foreground. Multiple listens only enhance one's appreciation for the mastery of Pieranunzi.

(In) Canto; Line For Lee; Sundays; Simul; No-Nonsense; Proximity; Within The House Of Night; Five Plus Five.