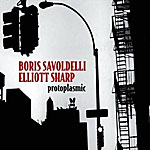 In the realm of free improvisation and even more structured pursuits, the limits of the human voice are being tested and expanded more than ever before by artists including Norwegians Sidsel Endresen and her groundbreaking One (Sofa, 2007), and Maja Ratkje with her equally innovative River Mouth Echoes (Tzadik, 2008). Italian singer Boris Savoldelli may have been mentored by Mark Murphy, but his approach on Protoplasmic—a challenging series of free improvisations recorded without overdubs with free-spirited guitarist Elliott Sharp—owes more, perhaps, to the almost unparalleled Phil Minton, caught recently in Bergen, Norway with the freewheeling Speeq.

Savoldelli demonstrates the same kind of unfettered abandon and ability to evoke unexpected vocal sounds acoustically, but it's his penchant for processing his voice—sampling it, applying all kinds of effects and more—that makes Protoplasmic a unique outing deserving of an equal place beside other intrepid albums of vocal experimentation. Absolutely not for the faint-at-heart, however, Protoplasmic is a largely jagged and angular affair, as Savoldelli and Sharp—who took a single acoustic guitar to great extremes at a 2008 Victoriaville, Quebec performance but here brings far more electricity to bear, in addition to his own arsenal of electronics and prepared effects—create a program of intense density, harsh extremes and occasional unexpected respites of surprising beauty.

Not entirely without rhythm, the opening "A-Quantic" revolves around a soft electronic pulse over which Savoldelli creates an ethereal vocal cushion, even as Sharp's prickly colors lead to otherworldly textures and guttural vocal utterances. The briefest respite leads into "Noises in My Head," with Sharp's acoustic guitar a building block for a briefly repeated pattern that supports Savoldelli's broad range and unexpected collage-like vocalizing. While it might, on first brush, appear challenging to discern who is doing what, closer listens reveal many of the duo's individual approaches to sound sculpting.

Delay, distortion, pitch shifting and other effects don't dilute the individual contributions—in Savoldelli's case a near reckless disposition that doesn't just push the envelope, but bursts through it entirely. Sharp, a longtime part of the avant/new music scene, is a proven exponent of pulling unpredictable sounds from the ether, and so it's Salvodelli who's the real revelation here. Still, that doesn't diminish Sharp's equal contribution to an album that, in challenging all preconceptions of what acoustic, electric and, most importantly, electronic manipulations can be, may not be an album for those looking for convention. Instead, the often frightening soundscapes of Protoplasmic break all convention, demonstrating how, with one voice, a guitar (a saxophone on one track) and a bevy of processing, two creative musicians can create one helluva joyous noise.