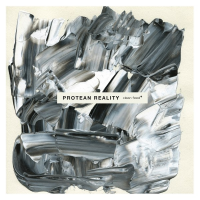 Alto saxophonist Chris Pitsiokos has been creating a buzz around NYC for a while now. After a series of releases on small independent imprints, Protean Reality constitutes one of the first opportunities for him to be heard by a wider audience. He appears in the eponymous triumvirate, alongside drummer Philipp Scholz and electric bassist Noah Punkt, recorded live in Leipzig in Germany. They combine for three spontaneously generated cuts each around the 20-minute mark which straddle the border between free jazz and free improv. Overall their sound is dense and fiery, as everyone plays lots, lots of the time.

At the core of the set stands the interaction between Pitsiokos' alto saxophone and Philipp Scholz' drums. Pitsiokos is fearsomely proficient whatever the syntax, and even blends more conventional passages amid the uncompromising high energy skronk and experimental timbres. On drums, Scholz favors a tappy clatter, though effectively generating momentum when the beat firms up, through a sort of twisted boogaloo. Punkt's percussive accents and melodic episodes are compelling, but at other times, as on some early free jazz sides, the bass seems tangential to the drive of the other two instruments.

Each track encompasses such a variety of expression such that description is ultimately futile. "Torturer's Horse" starts with alto squawks reminiscent of Roscoe Mitchell in its reiterated angular line. Then comes bursts of machine gun chatter drums, and finally roving electric bass joins. That's not a bad introduction to the band. Later the exchange between Punkt's fuzz and electronic beeps and Pitsiokos' squeals and whistles sparks excitement. When Scholz moves to cymbals he imparts a jazzy thrust which makes for an 100 miles an hour opener.