By JOHN SHARPE
September 30, 2018
Sign in to view read count 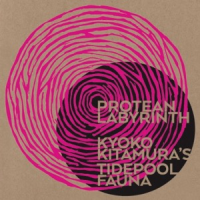 For her second leadership outing following Armadillo In Sunset Park (self produced, 2012), vocalist Kyoko Kitamura assembles a group which she calls Tidepool Fauna. And giving the group an identity seems entirely appropriate as what they create is very much an ensemble music. That's made all the easier by having such accomplished talents as saxophonist Ingrid Laubrock and bassist Ken Filiano on board, and drummer Dayeon Seok confirms that she is at home in such company too. Kitamura herself might be best known for her association with Anthony Braxton, appearing in some of his Trillium opera series, as well as notably duetting over four CDs on the monumental 12 Duets (DCWM) 2012 (New Braxton House, 2013).

She brings all that know-how to bear on six of her own compositions and two collective endeavors, one of which, "Lure," opens the album. The restraint shown by the participants here results in an unfettered conversation full of grace and poise, which ends on a crescendo after some spine-tingling convergence between tenor sax and voice. That combination also comes to the fore elsewhere, especially during the chattery interchange of "Tripwire" where it evolves out of a theme in which Laubrock shadows Kitamura's wordless phrases. Later the same piece foregrounds Filiano for a stream of deliciously bent notes demonstrating once again that he remains one of the most melodic players in avant jazz.

Kitamura uses her voice just like another instrument, exerting exquisite control, eschewing lyrics for direct emotion, although sometimes seeming as if she is discoursing in an unknown language somewhere between scat and speech. While she can and does hit the extremes, there's a mellifluous songlike quality at the heart of her conception which when allied to Filiano's lyrical richness engenders a warm approachability. Furthermore she pulls off the trick of writing material that maintains focus, but doesn't constrain, allowing everyone the freedom to be themselves, albeit within the parameters of the charts.

There's a common form to the three versions of "Push" in that the band takes their lead from Kitamura's mode of expression. This manifests as an exchange of overlapping short outbursts in "Push Four," a sparse give and take of long sounds and silences in "Push One," and most radically a sequence of joyous unisons in the concluding "Push Two." But those are just the starting points as the three cuts diversify unpredictably thereafter. "Slide" manages to be both the most formal, coming on like a grave threnody, and the most animated, with both Laubrock and Kitamura cutting loose, staying just this side of screaming, only to end with Filiano's anguished bowing over Sayeok's splashing cymbal and hihat.

With such empathetic execution of her idiosyncratic ideas, Kitamura fashions an immersive experience like little else.

Tripwire; Push Four; Slide; Deadbolt; No Exit; Push One + Things We Need (Aren't All That Much); Push Two.