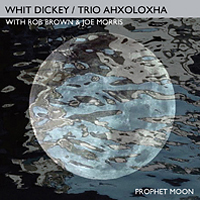 The three players who make up Trio Ahxoloxha have long been musical intimates and regular participants on the New York free jazz scene. Drummer Whit Dickey, guitarist Joe Morris, and alto saxophonist Rob Brown united for the 1993 record Youniverse, and they've also intermingled on records by Morris, Dickey, and Matthew Shipp. The intimacy this shared association affords is what drives Prophet Moon.

While Dickey serves as the formal leader of this date (and it's his compositions that serve as its framework), it's clear pretty early on that this improvisational partnership is quite egalitarian in practice. And given the strikingly distinct voices of these players, the combination can be quite unpredictable and exciting.

Dickey's approach to drumming is idiosyncratic to say the least; while he brings an element of color and drama to the kit, his playing is anything but predictable. Unlike a lot of his colleagues, he seems eager to pursue the middle ground between emotional intensity and cerebral expansion. Best of all, Dickey has an uncanny ability to swing right under your nose. Guitarist Joe Morris, known for his uncompromising density on record, assumes a significantly more understated role here. In addition to his usual lightning-quick lines, he employs gentle held tones to contrast with Brown's soaring sweeps on "Telling Moment" and comes very close to comping at times on the 18 minute-long title track and elsewhere. (But don't worry, nobody's compromising at all.)

If there's one player who really stokes the fire, it's Rob Brown. Brown drew a lot of attention for his recent role on William Parker's 2000 record O'Neal's Porch, where his range and clarity served as a major driving force. Likewise here. He has an uncanny ability to impart an emotional glow to the music. The alto (with its deep history in the hands of Eric Dolphy and Jimmy Lyons) is the most birdlike of horns—Brown exploits this with sweeps through cascading flurries, deliberate cries, and soft lyricism, all placed to reinforce the group's flow and pulse.

By the conclusion of the record, it's very clear that none of this music was forced or over- intellectualized. As a combined personal statement Prophet Moon represents the individual voices as much as the shared vision. But regardless, the overriding feature of the music is that it's entirely genuine. And there's no faking that.

Visit Joe Morris and Riti Records on the web.

The Word On The Street; Prophet Moon; Trial By Fire; Riptide; Telling Moment.