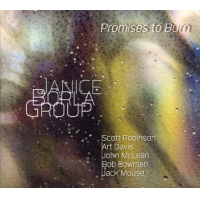 The artist title is a hint: "The Janice Borla Group." Borla is a vocalist with a reputation for taking chances as evidenced on her three previous recordings, all released on Tall Grass records, From Every Angle (2006), Agents of Change (2003) and Lunar Octave (1996). What she effectively does on the current Promises to Burn is elevate jazz vocals from the realm of vocalist with rhythm section and tone color support to a fully integrated instrumental ensemble not unlike vocalist Tierney Sutton's approach with her Tierney Sutton Band. What this takes from Borla's part are chops and chops she has to spare. Her voice is warm and pliant, capable of everything from a low croon to high fireworks.

While it is okay to have a fully capable voice, without a sense of repertoire. Song choice is often a sticking point when putting a recording project together. Songs that are too familiar often make for "just one more collection of standards," a problem identified by critic Scott Yanow in his The Jazz Singers: The Ultimate Guide and dealt with in his "Ten Songs That Should Be Avoided" (yes, "My Funny Valentine" is one of these). Gratefully, this is not a problem with Borla's offering. Quite to the contrary, Borla selects eight compositions that are anything but run-of-the-mill.

Borla and her guitar-based rhythm section deliver round and polished performances geared toward showing off both Borla's impressive scat and vocalese capabilities as well as guitarist John McLean's solo and comping talents. The disc is opened with a Bill Evans/Karen Gallinger composition, "Funkarello," that features a wordless vocal duet introduction between Borla and bassist Bob Bowman. Borla warms up Joey Calderazzo's "Midnight Voyage" which is gently augmented with Art Davis' softly round trumpet tone. Borla's wordless vocals on Lennie Tristano's "Lennie's Pennies" fully transform into a supple and precise musical instrument playing in concert with Davis' muted horn and McLean's softened tones. The scat solo is well conceived and executed, Borla never repeating herself.

The two best known pieces are a laconic and ironically delivered "You Don't Know What Love Is" and a slow and deliberate "If You Could See Me Now." Borla and her fine band are expertly tuned and thoroughly schooled in the effective assimilation of vocals into the egalitarian environment of the jazz ensemble.

Funkallero; Midnight Voyage; Some Other Time; Lennie’s Pennies; Silver Hollow; You Don’t Know What Love Is; Runferyerlife; If You Could See Me Now.