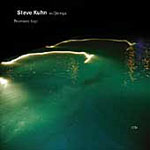 Combining jazz composition with orchestration is always a risky proposition; the outcome can often be bombastic, syrupy or melodramatic. But in the proper hands the combination can yield a result that is truly beautiful, allowing for a dramatic enhancement of the writing that, while allowing for some improvisational context, truly brings out its essence. "A life's dream," according to pianist Steve Kuhn, Promises Kept takes a life's work of material and, in the sensitive hands of conductor/orchestrator Carlos Franzetti, treats it with reverence and respect, heightening the emotional content without ever becoming grandiloquent or over-dramatized.

Utilizing a string ensemble that is strong on violins, Franzetti's collaborative arrangements with Kuhn emphasize the light ; the orchestrations never become overbearing or weighty. From the opening notes of "Lullaby," it is clear that the they are meant as subtle refinements; while they do, on occasion, dominate, they never overwhelm.

Kuhn is a lyrical and often romantic writer who manages to avoid the obvious trappings and create pieces that go to unexpected places; unpredictable though they may be, his melodies are so richly hued as to feel oddly familiar. And by revisiting older pieces including "Trance," "Oceans in the Sky," and the often-reconsidered "Life's Backward Glance," Kuhn creates a sense of history for those familiar with his work. Franzetti, in fact, was approached because he was so intimately familiar with Kuhn's work as to be able to sing lyrics to thirty-year old Kuhn pieces from memory. The result is a recording where strings, piano and long-time Kuhn collaborator David Finck's double-bass blend smoothly into a coherent whole.

Differentiating form from extemporization is difficult and, ultimately, pointless; what is the point is how the result manages to combine structure with a sense of surprise. "Life's Backward Glance" begins with deep cellos evoking a haunting theme that is gradually joined by the higher strings, moving from disquieting to beautiful; Kuhn's rubato theme brings a sense of romance as he shades the piece with subtle improvisations. The whole album is characterized by a multiplicity of layers that yield new experiences, new nuances, with every listen.

While the album traverses a breadth of emotion, there is nothing jagged or confrontational. But what makes Promises Kept unique is its ability to wash over the senses without becoming merely beautiful background music. As smooth and sensuous as it is, it demands attention. From Kuhn's unpredictable writing and playing to the emotive yet subtle orchestration, Promises Kept succeeds where so many other albums fail, creating a sense of deep beauty that never accedes to excess.