By Jim Santella
October 9, 2006
Sign in to view read count 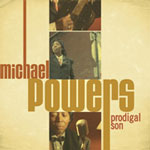 Powers grew up on the East Coast. His songs paint a picture of life up and down I-95, hitting the road in search of answers. He brings us plenty of food for thought as he sings about unrequited love, gettin' some respect for one's accomplishments, getting hooked, searching for freedom, and movin' out. One instrumental number, "Compassion, a duet, features Powers on acoustic guitar with Jimmy Vivino on dobro in a comfortable country blues setting.

For the most part, Powers rocks hard with electric guitar and plenty of action. He cites guitarist Jimmy Reed as a major influence. Emotions run strong and the bluesman is convincing.

The big surprise is Powers' penchant for blues variety. Contemporary blues, jump blues, country blues, white-hot electric blues and folk blues give the program many aural angles. He's just as likely to remind you of the Rolling Stones or Muddy Waters as Jimi Hendrix, the Allman Brothers or the Blues Brothers. As long as he remains as eclectic and excited about the blues, we'll always know that his dining room holds a veritable buffet of impassioned blues.