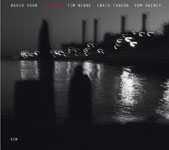 David Torn has always been an unrepentant anti-guitarist. As early as his '80s work with Everyman Band and the Jan Garbarek Group he's been less about the expected guitar roles of melody, rhythm and muscular soloing and more about texture and revolutionary processing. In recent years he's brought his distinctive soundscaping concept to recordings by saxophonist Tim Berne's Science Friction and Hard Cell, as well as others by bassist Drew Gress and trumpeter Dave Douglas. It's been nearly a decade since his last album as a leader, and over twenty years since his last album for ECM, 1986's exceptional Cloud About Mercury.

As good as Torn is at creating otherworldly aural landscapes that reference everything from improvised music and jazz to progressive rock, classical and world music, none of his previous records have represented his full capabilities.

Until now. Prezens is the record that Torn fans have been waiting for, the most fully realized of his career. By enlisting Berne, keyboardist Craig Taborn and drummer Tom Rainey, Prezens might appear to be a different slant on Berne's Science Friction band, with Torn substituting for French guitarist Marc Ducret. But this largely improvised album bears little resemblance to that group, focusing, as it does, on Torn's penchant for extreme sonic manipulation where sound and ambience trump melody and simple form.

Torn is the American equivalent of Norwegian artists including sampler Jan Bang and Eivind Aarset—another guitarist whose playing often sounds like anything but a guitar. While it's often possible to delineate the rest of his band mates, there are times where Torn samples their playing in real time, feeding it back in radically altered ways to push the music in new directions. That said, everyone in the group contributes their share of responsiveness and assertive motivation.

That's not to say there isn't some semblance of recognizable theme, harmonic movement or rhythm. Much of "Ak" revolves around a repeated pattern that's references music of the Delta in its own skewed way. "Bulbs" has a clear melody that acts as a starting point for an excursion into a multiplicity of symphonic, atmospheric and minimalist spaces until Rainey's processed drums enter and create a pulse that ebbs and flows before opening up into a pounding, head-banging piece of industrial electronica.

"Them Buried Standing," one of four compositions written solely by Torn, finds the guitarist playing a series of clean chords that are rapidly expanded across the aural field to create a lush orchestral vista. It's a gentle contrast to the more aggressive stance of "Sink," where high-pitched screeches are propelled by Rainey's tumultuous drumming.

Prezens is not for the faint-at-heart or those married tightly to traditional definitions. Creating its own sonic universe by marrying real time improvisational interaction, abstruse form, and sonic expansion through live sampling and post-production manipulation, it's a boldly adventurous record that is sure to rank as one of the best of 2007.

Ak; Rest & Unrest; Structural Functions of Prezens; Bulbs; Them Buried Standing; Sink; Neck- deep in the Harrow...; Ever More Other; Ring for Endless Travel; Miss Place, the Mist...; Transmit Regardless.