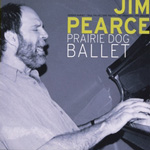 This effort by pianist/composer and bandleader Jim Pearce gives maximum exposure to his songwriting ability. In my reaction to his self-released album Thirty Year Waltz (2003), also comprised of all originals, I expressed regret that Pearce didn't include any standards or jazz standards, which would have offered listeners familiar melodies.

This time around, however, Pearce contributes another eleven originals that do indeed stand by themselves. The pacing of the album and the music is just short of perfect. Two ballads, "Unknowable Blue" and "One More Tomorrow," are among the high points of the album, prominently featuring Joe Gransden on trumpet and Eric South on tenor sax. "Tuckersamba" begins with the whistle and propulsion of a street samba band, and on "Halfway Home," Ken Gregory contributes a tasty guitar solo. Jim Pearce's stamp is all over the album, between his probing comps, solid playing and insightful solos.

Jim Pearce also supplies vocals on four tracks. The first two, "Why Haven't I Got You" and "Now That You're Gone," have lyric messages that are 180 degrees apart, and with quite clever lyrics, in Dave Frishberg/Bob Dorough territory. Pearce sings them in a hipster fashion as Frishberg or Dorough might, but he has some sort of minor speech impairment which spoils the individual presentation.