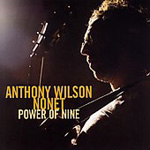 Anthony Wilson has been a vital member of singer Diana Krall's group over the past few years, but the guitarist has also been able to maintain his own identity as a bandleader and composer, recording five albums since 1997. These releases have met with very positive critical responses.

On his sixth and most ambitious work to date, Power Of Nine, the guitarist works with a nonet. Given the fact that he is the son of famed bandleader Gerald Wilson, the addition of horns to a smaller combo setting (in which he's done most of his previous work) raises the question as to whether Anthony Wilson is heading in the direction of leading a big band. After hearing Power Of Nine, it only seems natural that he is finding great musical strength in the added coloration of a larger ensemble.

The album begins with Duke Pearson's "Make It Real." After a casual rhythm section intro that takes over one minute, the horns enter, followed by a Gilbert Castellanos trumpet solo as Wilson re-works the original Pearson arrangement. "I and Thou," part of a two-part suite called Tokyo Wednesday based upon Wilson's travel experiences, is a reflective piece for both Wilson and pianist Donald Vega. About halfway through the composition, the horns enter and the pace picks up a bit to standard ballad tempo.

Diana Krall provides a guest vocal on "Looking Back," which serves as an homage to pianist/vocalist Jimmy Rowles, one of her former teachers. The song is steeped in melancholic remembrances and was originally sung by Rowles' daughter, Stacy, on Looking Back (Delos, 1988).

The central part of this album is a four-part suite called Quadra, which escalates from a brief intro to the entrance of the horns, then a lengthy bass solo from Derek "Oles" Oleszkiewicz on "Vila Madelena." On "Quadra 3 (Coisinha)," the tempo picks up midway to a samba rhythm with spirited solo work from Wilson. On the final part of the suite, "Javali Witness," Wilson and then trombonist Alan Ferber provide solid solo work. Wilson also adds mandolinist Eva Scow to the final half of the "Quadra" suite, to great advantage.

The following "Amalgamation" is another Wilson composition in tribute to the merging of two racially segregated Los Angeles unions into one. Alan Ferber's trombone and Mark Ferber's drums are the highlights of this tune. A hidden, untitled track is a spirited selection that features the baritone sax of Adam Schroeder.