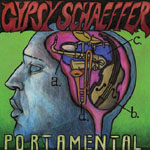 For Gypsy Schaeffer's followup to its 2004 debut recording, the group presents a similar pattern. The band consists of the same personnel, with the exception of bassist Jef Charland, who replaces Edward Perez. The ensemble takes its name from a bordello in the turn-of-the-century Storyville section of New Orleans where Jelly Roll Morton once punched the proverbial time clock. Most of the band has worked with the cutting edge Boston-based Either/Orchestra, and it shows.

It is quite understandable that the group's members welcome the absence of a piano, because that allows them greater freedom to explore free jazz as well as mainstream musical interests, and there is virtually something for everyone here. The bracing "Under Construction" and "Ponus Ridge" are good examples of their brand of hard bop, while "Mummer's Day" suggests a New Orleans Marching Band gait. Both "Time Management" and the title tune (with a fair amount of screeching towards the end) display the group's penchant for the avant-garde, while "01" and "Ugly Hand" lean towards edgy neo-bop. Those interested in Gypsy Schaeffer's take of a Monk-like theme should go directly to "Schemin'."

Most of the solo space is given to saxophonist Andy Voelker and trombonist Joel Yennior. Voelker seems quite comfortable in a mainstream setting, but he also shows his affinity for outside playing; Yennior has a rich and attractive sound that calls for a standard or jazz standard ballad. How about throwing one in on the next album for old time's sake?