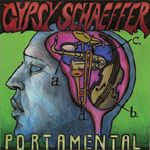 It makes sense that Gypsy Schaeffer is named for a New Orleans whorehouse, albeit one that boasted Sidney Bechet and Jelly Roll Morton as parlor musicians. Reedman Andy Voelker and trombonist Joel Yennior have a sound and a dynamic that would fit into almost any NOLA unit, and the lack of a piano in this group makes Voelker and Yennior the primary tone-setters on its second self-released disc, Portamental.

That said, please don't get this New England quartet mixed up with Preservation Hall or the Rebirth Brass Band. Yennior is a charter member of the always groundbreaking Either/Orchestra, while Voelker and drummer Chris Punis are devotees of Wayne Shorter and Charles Mingus, respectively. The whole of Portamental is played out on the edge, and in the case of bassist Jef Charland's stumbling, suite-like title tune, Gypsy Schaeffer drags us over the edge and into the ozone.

The track transports you to the port of New Orleans, where it's either very early or very late, and the protagonist of the piece has had one too many hurricanes... or one Hurricane too many, if you will. Things creak and moan in the shadows, and everything (including the protagonist) is rolling and swaying. If Apocalypse Now had been shot in the Big Easy, this would have been the soundtrack.

Although the interplay of the musicians is hypnotic, this is not dialogue; it's more a collection random sentences and exclamations coming at you from above, below and behind you, and if you were drinking from the bottle before, you'd want it as a weapon now. The same late-night surrealism seeps through Yennior's furtive "Schemin' and the Charland composition "Sleep. Charland's bass is the catalyst for the latter piece, a troubled off-kilter waltz that gets its color in splashes from Voelker and Yennior.

New Orleans is the background again for "Mummer's Day, another Charland tune that combines a NOLA funeral procession with the March of the Wooden Soldiers. The vibe alternates between loping reverence and joyous abandon as you are dragged along by this twisted second line. Punis' "Time Management and Voelker's hard-bopping opener "Under Construction have equal but different levels of freneticism. Though Punis is the Mingus aficionado, all the compositions on Portamental share Mingus' mission to take established frameworks, twist them into exciting new shapes, and then smash them to pieces.

A lot of my favorite new releases haven't come from mega-labels; they're either out of smaller houses like Palmetto and Ropeadope, or are DIY projects by artists like bassist John Menegon and saxman Marcus Strickland. Portamental is more proof that the good stuff is happening far, far away from the mainstream.