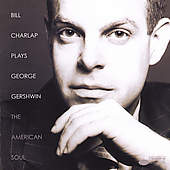 Pianist Bill Charlap continues his inexorable climb up the top-tier, big-time jazz mountain with Plays George Gershwin, his first release since last year's Somewhere: the Songs of Leonard Bernstein. Here this quintessentially New York pianist covers another quintessentially New York composer—in this case, one so frequently covered by jazz musicians that one wonders whether Charlap and his longstanding trio of bassist Peter Washington and drummer Kenny Washington can find anything new in Gershwin's music.

But they can. And while Charlap's group plays as an unsupplemented trio on three songs (and Charlap plays solo on one), they're supplemented elsewhere by an all-star horn quartet: Nicholas Payton on trumpet, Slide Hampton on trombone, Frank Wess on tenor sax, and Charlap's one-time employer Phil Woods on alto. Charlap's arrangements for septet—and the occasional quartet—have the same characteristic uncluttered elegance one associates with his trio.

The tunes, of course, are first-rate; that's a given with George Gershwin. "Somebody Loves Me is taken mid-tempo and is all unhurried, unruffled swing, starting with the ensemble horns playing its syncopated head and proceeding into solos from, well, everyone. Woods' solo is particularly fine as he seems to intentionally channel Cannonball Adderley, throwing out blues phrases, quoting other tunes—but he's in especially fine form throughout the session. Peter Washington's trademark walking bass meshes with Kenny Washington's chiming quarter-note cymbal and offhanded snare accents under Charlap's so-sparse comping, pure understatement and gossamer groove; this kind of organic, fused simplicity is the result of years playing together.

Those three players can achieve that fusion at any tempo, too. "Liza is a skittering, caffeinated trio number played fast, with impossible snare triplets from Kenny Washington. You can hear the classical side of Charlap—or perhaps just a touch of Art Tatum—in his completely even articulation at high speed. The trio accompanies Wess alone on "How Long Has This Been Going On? , and while including a smoky, blue tenor ballad on the CD might seem predictably compulsory, the execution is above reproach. Even better is the Woods quartet feature, "Bess, You is My Woman Now, where the altoist and Charlap are at their most movingly expressive—Charlap, as always, sounding simultaneously emotionally raw and rigorously thoughtful. No one today digs deeper into a song.

And best of all is the trio ballad "I Was So Young and You Were So Beautiful." Charlap's notably his own man as a player, but here one is reminded of Bill Evans, if only in Charlap's use of space and singing lines, and an impression of tremendous preparation before the red light in the studio ever comes on. This is a song one feels compelled to immediately hear again.

But that's also true of the disc as a whole. Not every great jazz player's on a major label—but some of the guys in the big leagues belong there, and Bill Charlap's one of them.