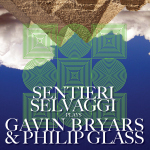 In an effort to bring greater attention to composers and ensembles via low-priced digital downloads (hard CDs available only to members of its subscription-only Cantaloupe Club), Cantaloupe Music—the contemporary classical imprint that features projects by new music ensemble Bang on a Can and its members, alongside other modernist ensembles including string quartet Ethel and all-percussion So Percussion—launches its series of EPs with Italian chamber ensemble Sentieri Selvaggi's sublime performance of Gavin Bryars' "Sub Rosa" and Philip Glass' "Façades." For those who believe contemporary classical music to be unapproachable, Plays Gavin Bryars and Philip Glass quickly dispels such misconceptions. Spare, elegant, and painfully beautiful, the performances will also be of interest to fans of Bryars and Glass, as Sentieri Selvaggi's instrumentation reveals new facets to these two subtle and attractive compositions.

Bryars' "Sub Rosa" has an interesting history. Through the British composer/bassist's early association with ECM Records, label head Manfred Eicher introduced him to the music of Bill Frisell, specifically the guitarist's In Line (ECM, 1983). The equally lyrically minded Bryars was attracted to Frisell's "Throughout," which has since become a regular in the guitarist's live repertoire, and decided to write his own variation on Frisell's enduring theme. Slowing it down and transferring the melody to piano, "Sub Rosa" would ultimately lead to a real-time collaboration between Bryars and Frisell on the composer's After the Requiem (ECM, 1991).

Sentieri Selvaggi's version bears much similarity to Bryars' recording on Vita Nova (ECM, 1994), since both ensembles feature recorder, clarinet, violin, vibraphone, piano, and double-bass. But with a larger ensemble that also includes a second clarinetist, second violinist, and cellist, Sentieri Selvaggi retains the ethereal nature of Bryars' arpeggio-driven composition while providing a slightly broader soundscape. Conducted by Carlo Boccardoro, the nonet possesses an ability to use the subtlest of dynamics to create a dramatic arc within the piece; a talent requiring the utmost respect and reverence for the music, as well as a nuanced ability to effect the slightest variations to create its inherent narrative flow.

"Façades," originally intended for Glass' soundtrack to Godfrey Reggio's groundbreaking confluence of sight and sound, Koyaanisqatsi (1982), ultimately found its place on the composer's Glassworks (CBS, 1982). Somewhere between the composer's relentless minimalism (he prefers the term "music with repetitive structures") and later less mathematical and more lyrical works, "Façades" is a more rhythmically propulsive piece than "Sub Rosa," even though Sentieri Selvaggi approaches Glass' composition with more restrained energy and, with clarinets replacing soprano saxophones as the primary melodic instrument, an overall softer timbre. The ensemble's interpretation also provides a greater link between Glass and more traditional classical music, with an attention to the beauty of its slowly unfolding melody comparing favorably with great melodists like Beethoven and Mozart.

If the rarefied beauty of Plays Gavin Bryars and Philip Glass is any indication, Cantaloupe's new digital EP series will be one to follow closely.