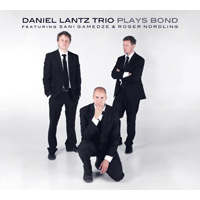 James Bond has a taste for the finer things in life; Aston Martin automobiles, Tom Ford suits, Omega Seamaster timepieces and mysteriously beautiful company from the fairer sex are just a few things that Bond bonds with these days, but jazz, sadly, doesn't make the list. While Monty Norman's famed "James Bond Theme" certainly paints a swinging picture of the world's favorite MI6 agent, Bond's connection to this music has fizzled out over time. Bond themes over the years have typically been performed by pop stars of the day with little or connection to jazz, but that doesn't mean these songs aren't jazz-worthy vehicles; pianist Daniel Lantz proves that OO7 and jazz can still make a hot couple.

The Swedish ivory tickler credits Bond music, and a wide array of other film music, for drawing him to the 88s to begin with. He would try to plunk out particular passages from various Bond themes and, though he's come a long way since that time, he never lost his love for this music. Now, as Bond celebrates 50 years in films, Lantz returns to one of his first true loves and delivers a collection of rearranged selections from the James Bond catalog.

Themes associated with artists like Shirley Bassey, Carly Simon Paul McCartney and Sheryl Crow make an appearance and, though it's one of his least jazz-inflected performances, Louis Armstrong's "We Have All The Time In The World" also makes the cut. Each theme melds the old with the new, as Lantz reshapes the material while still retaining the essence of the original(s). "The James Bond Theme" is reborn in five, while "Diamonds Are Forever" takes on a reggae-inspired feel. "On Her Majesty's Secret Service" springs to life as an up-tempo swinger, and Sani Gamedze's fine vocal performance wins the day on the slow-flowing "Tomorrow Never Dies." The Burt Bacharach-esque "If There Was A Man" is another feather in Gamedze's cap.

While the record is billed as a trio outing, Gamedze and tenor saxophonist/flautist Roger Nordling are both featured on multiple occasions. Nordling's flute brings a light-as-air feeling to "If There Was A Man" and his tenor work can be semi-soulful ("Nobody Does It Better") or dryly insouciant ("The James Bond Theme"). It's tempting to simply see this as a quintet date with some trio work built in, but that would be a mistake; it would overlook the connection and rapport that exists between Lantz, bassist Erik Ojala and drummer Daniel Olsson. They navigate sharp turns together, bring a sense of drama and art into this music, and also know how to connect in less-than-flashy environments ("We Have All The Time In The World"). This trio understand that Bond's music, like the man himself, deserves classy attire, but classy need not be complicated.

Moonraker; The James Bond Theme; Goldfinger; Diamonds Are Forever; Live And Let Die; Tomorrow Never Dies; You Only Live Twice; A View To A Kill; On Her Majesty's Secret Service; If There Was A Man; Nobody Does It Better; We Have All The Time In The World.