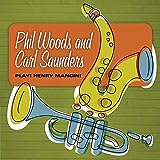 Yes, it's "The Pink Panther," "Mr. Lucky" and "Two for the Road," but if anyone can take the late film/television composer Henry Mancini's quasi-jazz and make it swing like a willow in a windstorm, it's two old (well, oldish ) masters like alto saxophonist Phil Woods and trumpeter Carl Saunders. And swing they do, as does the unsung but abundantly talented Denver-based rhythm section of pianist Jeff Jenkins, bassist Ken Walker and drummer Paul Romaine.

It's readily apparent that the quintet is having a marvelous time digging into Mancini's themes, seven of which are from the television series Peter Gunn (but not the well-known title song). Besides the roguish "Panther," the others include the principal motifs from the films "Two for the Road" and 'soldier in the Rain." Although Mancini wrote with the masses in mind, he had a fondness for jazz that was often reflected in his music, some of the clearest evidence of which can be heard on "Walkin" Bass," "Fallout!," 'sorta Blue," "A Quiet Gass" and the loose-limbed, ultra-hip "Goofin' at the Coffee House." As Woods says in the liner notes, "[Mancini's] writing is in the tradition of Gershwin, Porter and Arlen—hardly a shabby group with whom to be associated.

Mancini wrote beautiful music too (check out "Dreamsville," one of the album's many highlights, which includes gossamer solos by Saunders, on flugel, and Woods, or the lyrical and pensive "Two for the Road"). The theme from "Mr. Lucky" is invigorated by changing the tempo from leisurely to double-time and implanting explosive statements by the dynamic duo. "Gass," on the other hand, is, like "Goofin,'" an unassuming swinger that seems to have been written with Jazz in mind, and Saunders and Woods take to it like the proverbial ducks to water.

Whether you're a Mancini fan or never cared much for his music, you may be swiftly ensnared, as I was, by the unflagging artistry of Messrs. Woods and Saunders, who place their imposing and indelible stamp on a dozen of his charming compositions. This is the third album I've heard from Graham Carter's fairly new label, Jazzed Media, and every one has been a winner.