By GLENN ASTARITA
August 25, 2015
Sign in to view read count 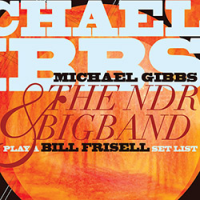 Guitarist Bill Frisell probably never had a preconceived notion that he'd one day record with famed British arranger, conductor and composer, Michael Gibbs after taking several of his classes as a student at Berklee College of Music back in 1975. Thus, Gibbs and the legendary NDR Bigband instill a symbiotic musical relationship throughout this cunningly envisioned game-plan, where Gibbs' arrangements encapsulate and boost a Frisell set list by conveying a bilateral succession of prismatic tonal contrasts. Moreover, in- demand American session drummer and solo artist Jeff Ballard performs on all tracks and steps into the spotlight on the shuffling, idiosyncratic and hard-hitting closer, "Freddy's Step."

Frisell's distinctive fretwork is in full form amid his elongated ethereal notes, nimble picking and distortion techniques used within various movements, complemented by the orchestra's polytonal choruses and dappled shadings. With Gil Evans' "Las Vegas Tango," the orchestra fuses a zesty Latin vamp, expanded by the guitarist's intensifying impetus. It's all about teamwork via a host of disparate song forms such as Frisell's drawling blues comp "Monica Jane," featuring wah-wah horns and other pleasantries such as the musicians' luminous rendition of The Beatles' "You've Got To Hide Your Love Away." Here, the hornists' chant the primary theme with resonating melodic delicacies, kindling a corpulent but fluid sound that's partially deconstructed by the guitarist's sparkling phraseology. In particular, there's no underlying trickery or overly cerebral propositions embedded in this entertaining program that institutes a manifold perspective on a Frisell set list, spanning numerous musical fronts.

Throughout; Las Vegas Tango: Subsconscious Lee; On The Lookout/Far Away; Misterioso; Monica Jane; You’ve Got To Hide Your Love Away; Benny’s Bugle; Freddy’s Step.