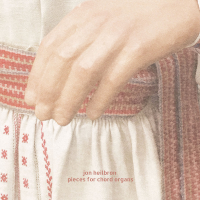 Although Australian double bassist Jon Heilbron had already accumulated an impressive CV for a player still in his twenties, the release of Pieces for Chord Organs marked the first album issued under his own name. His past releases consisted of one track on the Norwegian cassette compilation Nonfigurativ Musikk 11 (Nonfigurativ Musikk, 2016), the album Small Worlds (Tone List, 2017) as a member of the sextet Quiver, playing music by Austria's Werner Dafeldecker, and The Station and the Underclass (INSUB, 2016), by Melbourne's nine-member Phonetic Orchestra, of which Heilbron was a founder member, for which he and other members composed the music.

By comparison, Pieces for Chord Organs represents a considerable change from his past releases. Instead of bass, Heilbron played two Bontempi portable chord organs in real time, performing two composed pieces, with a total duration of just under thirty-four minutes. He wrote and honed the pieces during a three-week stay at the St. Petersburg Artist Residency, in August 2018. The album was recorded at the 2.04 Gallery in St. Petersburg on August 23rd.

The YouTube clip below shows Heilbron in action at the organs. It illustrates that his organ playing is far removed from church organ recitals or improvisations by an organ virtuoso. Instead, referring to the sheet music of his compositions, Heilbron slowly and deliberately sounds prolonged single notes or chords on the two organs. As he only makes occasional subtle changes, the soundscape evolves gradually without any shocks or surprises along the way.

The end results bear witness to the care and attention that Heilbron invested in his compositions; in particular, the interactions between the notes from the two organs add interest to the soundscape, with the resultant harmonies and pulsating beats being endlessly fascinating and enthralling. Despite both being created using the same instruments and methods, the two pieces are distinctly different but unquestionably from the same source. Together, they combine to make this a promising start to Heilbron's solo recording career.