Various Artists: Piano In The House 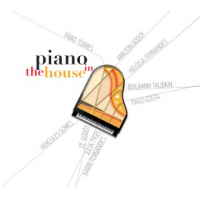 Pianist Benjamin Taubkin is a tireless promoter of the arts in Brazil. When he isn't out concertizing by himself, with the Latin collective América Contemporânea, the choro ensemble Moderna Tradição, the Orquestra Popular de Câmara, or any number of other groups he works with, he can be found busying himself in other arts-related matters. In 1997 he founded Núcleo Contemporâneo, an independent label and production company that's released approximately 75 albums, and in 2011 he expanded that operation with the creation of Casa do Núcleo—a cultural center that plays host to workshops, concerts, celebrations, and gatherings of various kinds. Since opening its doors, this institution has been the scene of countless events while building a reputation as a small but important hub of musical activity in Brazil.

Piano In The House, recorded live at Casa do Núcleo in August of 2014, is a piano summit featuring nine of Brazil's finest players. There are appearances by respected elders, rising stars, and lesser-known players deserving of greater recognition, but status and hierarchy are of little importance here. Instead, this album is all about community and an appreciation for the differences that make each artist unique. The abundant gifts of Brazil's premier piano artists are fully on display during this memorable aural affair.

While no two players go at the music the same way, some come under the same umbrella in terms of philosophy and spirit. Karin Fernandes and Julia Tygel, for example, both seem to embrace and project complex, multi-hued darkness through their performances, and Amilton Godoy and Hercules Gomes each tend to take a very rhythmic approach to playing. But then there are also those that stand completely apart: Taubkin, for one, tends to be more ruminative than the rest of the crowd; Ze Godoy blends impressionism and jazz romanticism into his own being; and Heloisa Fernandes delivers a hypnotic blend of music that pulls from many schools and places yet owes firm allegiance to none.

With each track comes an opportunity to further appreciate and investigate the many and varied strains of music that are part of today's Brazilian piano narrative. This was clearly a special event, and Taubkin deserves a good deal of credit for producing it. He remains an unheralded hero, unflagging in his promotion of Brazilian culture.