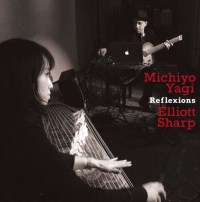 Tokyo-based koto player Michiyo Yagi and New York-based guitarist/composer Elliott Sharp have been collaborating since the mid-nineties. Yagi, during her tenure as visiting professor of music at Wesleyan University, was looking for role models who transform the conventions of their instruments, experimenting with sound and musical forms. Sharp was one of these mavericks that Yagi was drawn to, along with others including Fred Frith and Marc Ribot. Over the years, this improvising duo, which has kept collaborating ...

The sophomore release of the trio featuring German reed legend Peter Brötzmann, Japanese koto iconoclast Michiyo Yagi and Norwegian master drummer Paal Nilssen-Love--following Head On (Idiolect, 2008)--is a remarkable demonstration of how energy and power transform into spiritual catharsis. It's easy to understand why this trio was named the Spirit & Power Trio during its Japanese tour, few months after this release was recorded.

It's not about muscular, full onslaught, raw power, as is often mistakenly associated with Brötzmann's many ...