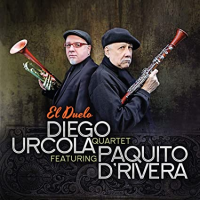 The cover of this album shows Diego Urcola (trumpet, flugelhorn) and Paquito D'Rivera (alto saxophone, clarinet) back-to-back, as if about to engage in the titular duel. But the sound is that of two veteran players jointly taking a leap into the unknown. A quartet without piano is an unusual setting for both of them. D'Rivera's liner notes mention Gerry Mulligan's quartet with Chet Baker (represented by “ I Know, Don't Know How"), but Ornette Coleman's quartet is another, more surprising ...

Jazz music, its freedom and emphasis on self-expression through improvisation, has always had a strong pull on its practitioners, its artists. As fans and listeners, those qualities are also treasured. The infectious nature of those qualities is why jazz fans are passionate and loyal. It's music, born and bred in the United States, that has a fan base that stretches across the globe. In the case of a certain young musician in Buenos Aires, just a few decades ... 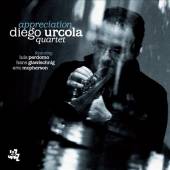 Subtlety seldom brings rewards in the life of a journeyman jazz musician. In a field overcrowded with competent colleagues, plagued by spotty media coverage and half-starved by the problems facing the music industry more generally, a gimmick is often required to garner even scant attention. Argentinian-born, New York-based trumpeter Diego Urcola--a long-time member of Paquito D'Rivera's quintet and a stalwart of the late-night NYC scene--avoids the gimmicks on Appreciation, his fourth outing as a leader. Instead, he pushes his Sisyphean ...

Trumpeter Diego Urcola's is a voice that has remained somewhat hidden--certainly tucked away--for two decades in Paquito D'Rivera's quintet. And then there is the subdued role he has played in Guillermo Klein's fabulous larger ensemble, Los Guachos. However, the graceful candor of his voice is irrepressible, and it was only a matter of time before he would be heard for what he really is and plays. Urcola is distinct and a singular artist in the manner of his more famous ...

Trumpeter Diego Urcola, a mainstay in Paquito D'Rivera's band, branches out on Viva with an all-star group that includes bassist Avishai Cohen and pianist Edward Simon. In addition, a bevy of Urcola compadres appear as guests, making for a diverse presentation of well-played originals with a Latin flair. Urcola, who hails from Argentina, has chosen to highlight the music of his country. Things begin with his own “Tango Azul, a deft combination of jazz and Latin music ...

With a predominantly Latino lineup and a title like Viva, one might expect trumpeter Diego Urcola's latest release to be heavy on joyous Latin rhythms. However, like his earlier work, it's much broader in scope. His last record, Soundances (Sunnyside, 2003), recorded with an all-Argentinean cast, managed to blur the boundaries between his cultural roots and the urban influences of his current home in New York. If anything, Viva, while not neglecting those roots, finds Urcola in an even more ...