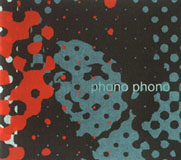 phono_phono is both the album title and the name of this new guitar-flute-piano-plus-electronics trio, seemingly led by Michael Renkel. Certainly, the music here is recognizably Renkel, with its mix of slower reflective passages and rapid-fire improvisation. The album has a clear structure: four extended tracks separated by three much shorter interludes. These interludes are not filler, though; each is a substantial piece in its own right. For instance, without becoming mere program music, "Interlude III" brilliantly simulates the sounds of a steam train, including train whistle, chuffing and a real sense of momentum.

While not at the threshold of audibility favored on some of the eai label's recordings, there is much here that requires attentive and repeated listening to do it justice. The extended use of small, deliberate gestures by all three players serves to build tension—almost unbearably at times. When release does come, in the form of louder, faster passages of play, the sense of relief is tangible.

The central track, "Perception Feedback" is a good example: having spent half of its nine-plus minutes employing micro-gestures between the players, the arrival of some stark inside-the-piano work from Magda Mayas, followed up by dramatic percussive block chords, is very welcome and highly effective. Neither section on its own would work as well; each needs the other; and all three players bring the track to a satisfying concluding crescendo together.

In similar fashion, there is a build-up across the whole album, with the final track, "Rasp and Rest" being the most outgoing, and providing a similar sense of conclusion and closure.

Across the album, electronics are used extensively to alter and enhance the sounds of the instruments, often producing passages worthy of sci-fi or horror movies. So one would not be surprised if "Interlude II" turned out to be the work of the Radiophonic Workshop, for example, or if sections of the closing track were found to be from a hitherto unknown Bernard Hermann soundtrack for Dracula!

phono_phono is a trio with a distinctive sound and identity; let's hope this release is just the beginning....