By DOUG COLLETTE
November 21, 2015
Sign in to view read count 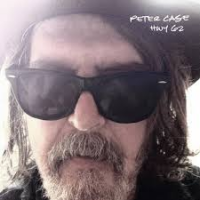 With his walrus-like goatee, dark glasses and a fedora knocked back over a straggly haircut, Peter Case looks like the devoted road warrior and musical explorer that he is on the cover of the aptly-titled Hwy 62. And the recordings inside bear out the wisdom he's gained over the years as a songwriter and musician, these eleven vivid tunes bearing witness to his insights and observations as brought to kinetic life by the presence of a single set of musicians comprising a band of which he is a part, rather than accompanists just backing him up.

That singular virtue should come as no surprise despite the fact Case has done mostly solo touring since the original dissolution of the Plimsouls in the mid-Eighties (they have reunited occasionally since). That memorable New Wave/punk ensemble was in fact the second unit of which the man was an integral member: he cut his teeth as a writer, musician and performer, fronting The Nerves (from whom Blondie borrowed "Hanging on the Telephone" for a hit) before proceeding on via an eponymous record produced by T-Bone Burnett, long before the latter's name had such cache, and equally far in front of the term "Americana" before that contrived genre label was coined.

Most of Peter Case's albums under his own name have echoed that work and this one is no exception right from its insinuating start on "Pelican Bay." The intricate acoustic finger-picking has an authority equal to the idea behind the song and, like the lyrics, evinces an ear-catching economy especially as it ends so abruptly. The much more humdrum topic of "Waiting on a Plane," isn't all that transparent though which is also in keeping with the arrangement including Case on acoustic piano and the brushwork of drummer D.J. Bonebrake, as a member of X, a contemporary of the author's in the Eighties Los Angeles scene.

Case doesn't get lost in following the wanderings of his mind on that cut any more than he does in depicting the adventures of a young musician in "New Mexico," the atmosphere of which guitarist Ben Harper heightens with a treated slide sound complemented by the organ washes of keyboardist Jebin Bruni's. Case's collaboration engineer Sheldon Gomberg as co-producer (the latter also worked on the Harper/Charlie Musselwhite project Get Up! (Stax, 2013) no doubt solidifies the bond of an ensemble that has plenty of individual performing experience, but only this set of sessions as a collective: that may, in turn, explain why bassist David Carpenter's short break on "Water From A Stone" carries as much logic as surprise.

As does the wry humor the songwriter displays in line with the delightful dobro work of Harper's on "All Dressed Up Jail," where Bruni's acoustic piano echoes the rhythm guitar while the billowing organ derives directly from the grin in Peter Case's vocal delivery. The sum effect of the musicianship only elevates the irony implicit in the lyrics as it invites singing along, almost but not quite as much as the barrelhouse style of "If I Go Crazy." another vignette the likes of which appears in the form of a vigorous cover of Bob Dylan's "Long time Gone.

This more more-conventionally blues-derived tune is an ever-so-effective foil for "The Long Good Time," its brightly reflective likes an artful segue to "Evicted," a healthily-detached account of hardship that Case and Co render with an appropriately buoyant detachment; fortunately it's one of the few tracks allowing for some soloing, most notably the front man on harmonica adding to the lighthearted mood. The reminiscence within "Bluebells" captures the alternately baffling and bittersweet sensation of trying to fathom the passing of a friend, evocative in no small part because of the gentle acoustic guitar interwoven with Harper's bright electric lines.

That absolutely brilliant song is only the latest of its kind from Peter Case and while it's not the last cut on Hwy 62, the abbreviated instrumental that is the titlesong makes for an ideal denouement as it heightens the drama of the preceding number and on its fade sets the stage for more material and recordings the likes of which comprise this beautifully understated album.

Pelican Bay' Waiting on a Plane; New Mexico; Water From a Stone; All Dressed Up (For Trial); If I Go Crazy; The Long Good Time; Evicted; Long Time Gone; Bluebells; HWY 62.