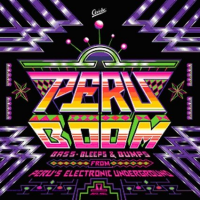 Lima is often referred to as the intersecting point for the cross-pollinating Andean, African, European and South American cultures of Peru, the cradle of the Incas. Club revelers throughout Central and South America (and the DJs who the spin music that keeps them dancing) also consider Lima to be home base for the Tropical Bass sound and style, and the birthplace of "the digital cumbia boom" which fuels dancefloors from South Africa to South Central Los Angeles.

"It was a life-changing night three years ago that led to the beginning of Peru Boom," recalls Martin Morales, founder of Tiger's Milk Records. "I was invited by my friends in a band called Dengue Dengue Dengue to one of their parties. DJs were mixing chicha rhythms with serious basslines and halfway through the night, chicha bands from the 70s would play on stage. Kids would go nuts at both the tropical bass and the traditional sounds. This was like a modern rave Peruvian style like I'd never seen before. Peru Boom tries to capture that sound."

Working with Tiger's Milk co-founder Duncan Ballantyne and tropical bass DJ Chakruna (Jorge Espinoza, who taught himself guitar before he was ten years old and has been producing electronic and other music since 2001), Morales put together Peru Boom to showcase Peru's most vital underground DJs and producers. "We've attempted to give an overview of the last five years' development of the tropical bass scene in Peru," Chakruna explains. "Initially we intended to include a track for each bass producer but eventually realized that the album would benefit from solely focusing on a vibe. That vibe aims to show the variety of genres coming out of the scene, and the influence of Peruvian chicha and cumbia."

Chakruna pulls two such vibes from his own catalog: "Cumbia Achorada," a tone poem written in rivers and rockets of sound; and "Sonido Chichero (featuring Chapillita)," cumbia interwoven with percussion into a more detailed and deeper sound, behind celebratory verses which sound like the vocalist is toasting at a wedding party, drinking more wine and dropping more inhibitions with each passing line!

Upon Espinoza's special invitation, Peru Boom clears room for four selections from Tribilin Sound, the stage name of Peruvian producer Alvaro Ernesto. Most of these emphasize the sound of the Peruvian drum called the cajon, and these tunes connect the music, the musicians and the listeners the best: Cajon is the first sound you hear in "El Carmen," introducing other percussion that in turn introduces more somber, ethereal electronics. The more spacious mixes "Underground Cumbia" and "Negroide" move the cajon and chanting voices to center stage, connecting modern techno with the indigenous tribal.

"Eduardo Y Hank" closes this anthology not with a Boom but in a more meditative, ambient electronic sound, its dynamic percussion chirping and bubbling beneath gentle synthesizer washes borrowed from a classic Isley Brothers' 1970s soul ballad.