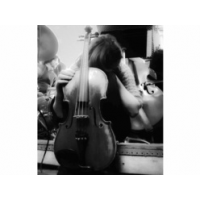 The debut album of drummer David Andrew Moore, a collaborator of world music band Slavic Soul Party, clarinetist Andy Statman and drummer Ches Smith, attempts to match modern jazz with elements of chamber music and African and European folk traditions. Moore chose a unique instrumentation for this recording—soprano sax, viola, bass, keyboards and himself on drums and percussion—in order to emphasize the delicate atmosphere of his compositions.

The four compositions in Personal Mythologies feature his quintet in a highly patient and respectful interplay, all based on the solid pulse of Moore, solidified by bassist player John Tate and the busy electric keyboards of Sean McCluskey. The sweet sax of Michael Eaton and the articulate viola of Sofia Zaitseva color the lyrical melodies in expressive shades. The first two pieces "Folk Dance for SM)" and "Inanna In The Underworld" suggest gentle European folk overtones. The playful third one, "Kirtimukha," after the name of a mythical monster of greed in Indian mythology, leaves more room for personal interpretations and improvisations on the theme. The most appealing piece is the last one, "Lament 1," where Zaitseva's melancholic viola finally takes the lead and and charges the warm theme with emotional power.

Folk Dance (for SM); Inanna In The Underworld; Kirtimukha; Lament 1.