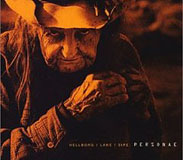 Caution! This is not the same Jazz Your Parents listened to.

In the mid-1970s, Jeff Beck ruled the world with Blow by Blow and Wired. These two hard fusion recitals went a long way to completing what Miles has started and Return to Forever and Weather Report perfected. Now, if one were to take that musical philosophical thread and cross it with the sensibilities of Jimi Hendrix Experience, early Stevie Ray Vaughan and Double Trouble, and Cream, one would get Personae.

Brainchild of German bassist Jonas Hellborg, Personae is a loud breath of fresh air. The disc was recorded live in the studio using mostly improvised lines, like a heavy metal Kind of Blue. Hellborg, guitarist Shawn Lane, and drummer Jeff Sipe form a molten jazz power-trio with a huge densely complex sound. These musicians have a virtuosic ability that can only be described as scary. Hellborg is the heir-apparent to Jaco Pastorius. His solos are inventive and make perfect sense. Lane is necessarily loud and brash, with a confident tone and attack. Jeff Sipe is a superb polyrhythmic drummer, not unlike Neil Pert. Hellborg has previously recorded widely, both as a leader and a sideman (for the likes of Billy Cobham, Ginger Baker, Tony Williams and Bill Laswell. Lane got his start, in of all places, as the lead guitarist for Black Oak Arkansas. He went on to become a studio and backup mainstay for talents ranging from Joe Walsh to Willie Nelson and the Highwaymen. Sipe, aka Apt Q 258, was a member of the groundbreaking Aquarium Rescue Unit and his recent stint with Derek Trucks. With chops like this, who needs planning

A note on the music and performance—to have been loosely organized, this trio performs vaguely organized ideas as if they were reading the poetry of the Greeks. The depth and breadth of this music make Personae a necessity for all Fusion wonks.

Time is the Enemy; RAG B/B; Personae; Heretics; Hell Is Other People; Rice With the Angels.