By Doug Collette
January 22, 2023
Sign in to view read count 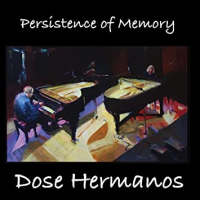 Consisting of two formidable contributors to the expansive oeuvre of the Grateful Dead, keyboardist/multi-instrumentalists Tom Constanten and Bob Bralove, Dose Hermanos explore areas of ambiance hardly unfamiliar to the iconic San Francisco band. Both men performed with the Dead, albeit at markedly different eras of the band's existence (Constanten as keyboard player from 1968 to 1970, and Bralove as an engineer, programmer, and occasional performer from 1987 to 1995), so each brings a unique perspective to their creation(s).

They are inspired rather than confounded by the plethora of instruments and devices at their disposal. Still, there's a tangible and crucial unifying factor: Dose Hermanos' approach has been to get as close as possible to 100% improvisation. And, in contrast to their previous outing, Batique (Self-produced, 2015), wherein the duo played solely on acoustic pianos (in different studios!), on Persistence of Memory, Constanten and Bralove also employ the full range of digital sound.

Thus, on the title song for instance (homage to the surrealism of Salvador Dali), washes of lush sonic textures sound like nothing so much as a string orchestra in action. The broad aural color scheme of "Inside The Ancient Tetrahedron" is similar except that its slow-motion ebb and flow crystallizes into a more pronounced rhythm pattern. It's indicative of the savvy track sequencing that no such pattern persists overly long over the course of this sixty-minute plus playing time.

Accordingly, the relaxed and reflective "Garden of Delights," with acoustic piano prominent, appears after the relatively intense track immediately preceding. With its electric piano enshrouded by MIDI horn lines. "Cirque des Etoiles" may be the most conventional-sounding cut here. Except, of course, the seemingly 'arranged' parts are being composed and performed in the spontaneity of the moment. Constanten and Bralove's instincts are clearly so closely matched that, at moments like this, it's as if the two are functioning with a total singularity of mind.

Surprisingly enough—or perhaps not—a playful warmth radiates from this unusual music, a sensation not wholly unlike that can often arise from that of the Grateful Dead's. Consequently, the gruff vocal of Bralove's on "Desire" turns into an almost wholly self-referential observation on what's taking place around his singing. And, in keeping with a wry undercurrent of humor here, it's no more or less literal-minded than "Bubbles" (which sounds just like those results of ferment look).

Recorded by Bob Bralove (except for three excerpts from a live performance captured by Art Granoff that bring the album to a logical and decidedly human conclusion), the music was then mixed and produced to be mastered by Joe Gastwirt: his technical expertise reveals the depth as well as the breadth of the multi-layered tracking. The audio quality is, in fact, a direct reflection of the nuanced clarity of mind Dose Hermanos bring to bear on this collaboration of theirs.

Persistence of Memory is indeed a fruitful meeting of the minds, but it doesn't necessarily stop with the performances on the album. It can also extend, fully and completely, to those who listen and hear them.