By JOHN KELMAN
November 7, 2007
Sign in to view read count 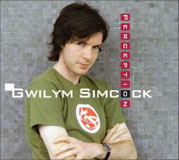 It's rare when an artist emerges to accolades like "the most important new pianist on the British scene," and even rarer when such praise is justified. It's rarer still when it's an artist like Gwilym Simcock who, at twenty-six, has won a bevy of British awards despite coming to jazz from a classical background less than a decade ago. For an artist so young, Simcock has racked up a staggering array of accomplishments—a member of drummer Bill Bruford's Earthworks and co-member, along with Earthworks saxophonist Tim Garland, in bassist Malcolm Creese's trio Acoustic Triangle. Simcock is also a significant composer, writing for groups ranging from trios to a forty-piece ensemble featuring a gospel choir and strings.

Too many young artists step out as leaders far too soon. Still, Simcock has paid plenty of dues in a short time span, including Acoustic Triangle's sublime Resonance (Audio-B, 2005), drummer Spike Wells' intimate Reverence (Audio-B, 2007) and Garland's ambitious If the Sea Replied (Sirocco, 2005). With Perception, Simcock debuts as a leader, and it's every bit as ambitious and mature as one might expect—and hope.

Revolving around a core trio of bassist Phil Donkin (another youngster at twenty-seven) and drummer Martin France (an exceptionally flexible drummer who's become ubiquitous on the British scene over the past two decades), Simcock's front-and-center on this album of largely original material that also features a few high profile (at least, on the British scene) guest appearances. "A Typical Affair" opens on a demanding Latin-esque note but, with complex shifts in meter that make it a challenge to "find the one," it remains accessible nonetheless. Simcock builds his opening solo carefully, as much a function of rhythm as melody, but with a deep sense of harmony that swings through his tough-to-navigate changes.

Saxophonist Stan Sulzmann, guitarist John Parricelli and percussionist Ben Bryant (heard here on vibes) flesh things out to a sextet for "Sneaky," a buoyant tune that references the knotty yet groove-heavy writing of the late Michael Brecker, and features a robust solo from Donkin as well as a brief but gritty solo from Parricelli. The romantic classicism of "Time and Tide," with Paricelli's nylon-string guitar, Sulzmann's soprano and Bryant's percussion, feels like Oregon at times, but with France's strong backbeat propelling parts of the tune, it's more grounded, less rarified. The rubato "Almost Moment" is darker but no less beautiful, with Sulzmann's tenor and Parricelli's electric swells creating long tones over which Simcock and France layer more fluid expressionism.

Simcock closes the set with two standards—a 10/4, wildly contrapuntal take on "The Way You Look Tonight" and a solo version of "My One and Only Love" that proves Simcock as capable without accompaniment as he is with. It's a fitting closer to a debut that makes it clear just how far-reaching this young pianist is. While he's already delivering on promises suggested by his emergence earlier this decade, Perception augurs much more to come.

A Typical Affair; Sneaky; And Then She Was Gone; Time and Tide; Almost Moment; Voices; Affinity; Message; The Way You Look Tonight; My One and Only Love (live).