By AAJ STAFF
August 21, 2005
Sign in to view read count
The late pianist Per Henrik Wallin's music, though heralded in Europe, is a barely known entity to jazz fans in the US. Wallin passed away in June at 58, but his playing and reputation went well beyond his years—the Swedish pianist was widely considered one of Europe's finest of the last three decades, along with Fred Van Hove and Misha Mengelberg. At times reminiscent of Cecil Taylor, Thelonious Monk, and Ahmad Jamal, Wallin is one of this music's great textural masters, with a classical efficiency utilizing strokes both light and feathery, as well as assuredly bold. With a discography creeping to a respectable size thanks to indie labels such as Atavistic, Ayler, and Moserobie, a more in depth picture of Wallin's artistry as a musician, composer and improviser has come to light. 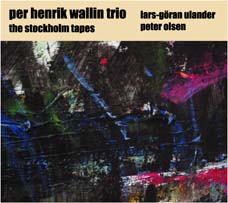 Wallin's energetic trio captured from two audibly different sources at mid '70s Stockholm concerts comprises The Stockholm Tapes. With Lars-Göran Ulander (alto sax) and Peter Olsen (drums), we hear rolling and tumbling improvisations. "E.V and "Wuppertal are dynamic and of better sound quality than the remaining two tracks, the former tune slowly starting off with Ulander unaccompanied and lyrical then gradually joined by the rumblings of his bandmates, their escalated tension rising to a boil. What remains constant regardless of the surroundings is hearing Wallin's every echoing note, from harp-like crescendos to theme and mood-creating circular patterns that provide a springboard for him and his group's improvisations.

Another live date, Wallin & His Gang's Mandelstam is one of the more memorable big band recordings of the last few years. This reviewer was fortunate enough to have witnessed this band live on a visit to Stockholm in April and many of the bandmembers heard herein were still together including Scandinavian sax/flute legend Bernt Rosengren. If you enjoy forward-thinking big bands that incorporate intricately arranged, powerful swirling horn sections comprised of top players, then do yourself a favor and go out and find this recording that you otherwise may have never known existed.

Though heavily structured, there's an amorphous quality to Wallin's writing and his playing is ever-present, though he only solos on two tracks—taking great joy in hitting all those so-called wrong notes while maintaining a swinging-as-ever solo on "Blues Out ; and exploiting the rare occurrence of the band dropping out during the closing of the title track into the concert's coda tune. This live recording ideally captures the spirit of big band music so commonly lost in the studio, as rather than use compositions as platforms for any number of soloists, Wallin—like Ellington—utilized each soloist wisely, featuring them in "tone poem situations.

Released only weeks before Wallin died, Velodromer is surely an unintended though appropriate epitaph. The solo album was casually recorded and comes off like a spontaneous performance, tracks 6 through 29 ranging anywhere from thirteen seconds to almost five minutes with tunes titled "Velodrome 1 through "Velodrome 24 respectively (the only standard is Ellington's "I Got It Bad And That Ain't Good ). It's a reflective occasion, one that looks back on a career full of ups and downs, recognition or not, but most importantly music of the utmost sincerity.

Tracks: E.V.; Wuppertal; A Jive in July; This Time Is Next Time Now.

About Per Henrik Wallin