By Edward Blanco
September 13, 2007
Sign in to view read count 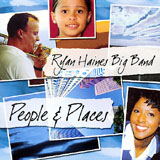 There's nothing more honorable and noble than paying tribute to the people you love and to those who have inspired you as well as recognizing some of the places that have meant something special in one's life. Composer/arranger/trombonist Ryan Haines does just that with his third recording, People & Places. Leading his world-class ensemble, which is made up primarily from the Airman of Note, the U.S. Air Force's premier jazz ensemble, Haines takes a special musical journey thundering through excellent original charts and arrangements dedicated to the people and places important in his life.

He starts the trip in San Diego, one of his favorite places and dedicates the Latin-shaded "Tierrasanta, a community within San Diego and home of his mother from where he penned this score. "Sabrina's Theme is dedicated to his daughter, providing an intricate piece of music with plenty of play from the horns and a stylish solo from the leader.

Changing styles a bit, Haines adds a little funk to the repertoire with the rumbling sounds of "Underground, showcasing Doug Morgan on baritone sax. Remembering the nine years in Colorado and the regular Wednesday evening gigs with the Springs Contemporary Jazz Band, he dedicates the lovely and melodic "Wednesday's Friend.

Paying special homage to his wife, Haines delivers a soft and beautiful performance on the balladic "Yvonne. Opening up with a burst from the woodwinds, "Blaine Street is one loud and raucous number, featuring Lucas Munce on a wild soprano, Tedd Baker on tenor and Steve Fidyk's powerful drumming.

On "Thicker Than Water, dedicated to members of his family, Haines adds a second big band consisting of five saxophones, four trumpets and four trombones, all meant to augment the sound of his own eighteen-piece orchestra on an expansive arrangement without solos.

The musical tribute ends with perhaps one of the best big band arrangements, the title track, featuring solos from guitarist Jim Roberts, Fidyk, Baker on tenor and, of course, Haines delivering another graceful shot.

Haines puts it all together in a collage of music and memories, honoring the People & Places that have made this a musical journey one that lovers of the big band sound will be eager to take.