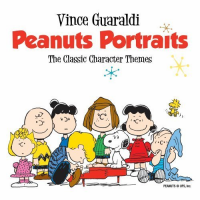 Charles Schulz's Peanuts has been an enduring newspaper cartoon classic since the late 1940s. Its popularity peaked in the 1960s when the series was adapted for the first of many animated television specials, with music written by jazz pianist Vince Guaraldi. The strips continue to run today in newspapers, 10 years after Schulz's death in 2000.

For Peanuts Portraits, Concord has compiled many of the most popular tunes from the series, originally recorded on LPs; selections that should appeal to both fans of Peanuts and jazz.

Beginning with the first special, December, 1965's A Charlie Brown Christmas (continuing to run annually ever since during the holiday season), the music itself became popular as it depicted characters from the childhood world of hero Charlie Brown. With Guaraldi's's jazzy interpretations, the cartoon personalities became even more vivid and lovable, and, over the years, further Peanuts specials were produced, all featuring Guaraldi's music.

Fans will immediately recognize the catchy "Linus and Lucy" on the opening track, performed by the trio; a tune that became very popular in the '60s. Guaraldi, though, really stands out on "Frieda" which, at six minutes, is the CD's longest number, displaying him at the apex of his bluesy, funky style.

After Guaraldi's untimely death in 1976 at age 47, George Winston recorded a stellar 1996 tribute album, Linus and Lucy: The Music of Vince Guaraldi (Windham Hill), and Peanuts Profiles ends with two of its numbers, featuring the pianist unaccompanied—a wonderfully soulful "The Masked Marvel," and, in an impressive technical tour-de-force, a personal reading of "Linus and Lucy."

This release provides a chance to become reacquainted with the creative force that was Guaraldi, as well as giving Peanuts lovers a chance to appreciate anew the world of this seemingly immortal cartoon series.