By DAN MCCLENAGHAN
December 18, 2016
Sign in to view read count 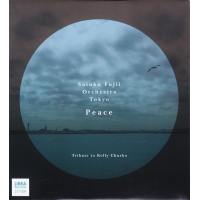 The rumor rolled out in mid-2016 that Japanese pianist/composer/bandleader Satoko Fujii had another orchestral album on the way. Peace was the title. "Peace" isn't a word that normally comes to mind when considering Fujii's music. "Bedlam," maybe, but not "peace."

In preparation for the oncoming Peace, three previous Fujii orchestral CDs on Libra Records came down off the shelf and spun onto the sound system: Ichigo Ichie (2015), by her Berlin Orchestra; Shiki (2014) from her New York group; and Zakoplane (2010), by the same ensemble responsible for Peace, the Satoko Fujii Orchestra Tokyo. The listening sessions confirmed the opinion that her large ensemble work is nothing if not adventurous and astounding, featuring brass/reed/rhythm section riots and percussive detonations juxtaposed against periods of delicately-rendered repose, sections of gorgeous harmony and near mainstream, two and three instrumental interplay, and noise, and squeaks and howls and sputters and brass flatulence

Noise: during a concert in San Diego in August of 2008 with her group ma-do, after her husband, trumpeter Natsuki Tamura involved himself with a call and response with the whistle of a passing train, a woman in the front seat of the audience, at the tune's ending, dropped her cell phone with a loud plastic clatter. Fujii, beaming, rose from her piano chair and told the woman that she liked that sound she had made. Certainly there was some Fujii-esque graciousness involved, but she was also certainly sincere. She really had liked that noise.

Peace, a tribute to the late guitarist Kelly Churko, who played on Fujii's Zakoplane and also her First Meeting set, Cut the Rope (Libra Records, 2009), starts with noise music—something Churko loved. The tune "2014" (the year Churko died) opens the album with what sounds like ghost breezes blowing through a spooky house. Then the chattering begins—the guess here it Natsuki Tamura working his trumpet magic, unaccompanied, then in duo with one of the set's two drummers five minutes into the thirty-three minute tune. Then the orchestra enters, in a loose, surging, melancholy segment that cuts off sharply, giving way a stuttering, squawking trombone interjected with low-in-the-mix vocal proclamations leading into a spirited trombone/tenor sax conversation. There is also a section that sounds like a stroll through a working construction site: jack hammers pounding, power saws singing.

Peace features a pair of guests from one of Fujii's wilder ensembles, Kaze: drummer Peter Orins and trumpeter Christian Pruvost. Provost combines his powerhouse percussive propulsion with that of the regular Orchestra Tokyo drummer Akira Horikoshi's. It results in some explosive moments. And Orins, combined with Tamura, leads the orchestra's brass sound into levels of density and strangeness not often heard.

The Natsuki Tamura-penned "Jasper" is a different sound, washes of horns pulsing over a drone, building to a crescendo then tapering down to relative peace. And the tune "Peace" is anything but peaceful. It opens as a riot, then moves into a segment that sounds as though they put a microphone up against a jar full of hornets, after somebody shook the jar. And the closer, "Beguine Nummer Eins," sounds almost mainstream, in a boldly pastoral way.

The pre-Peace spin-through of Fujii's previous orchestral outing says that the composer took more than her usual risks in putting this sound together. It has an audacity and powerful joy of creation that rises, ever so slightly, above her best orchestral work.