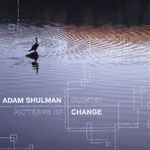 Patterns Of Change is pianist Adam Shulman's second CD, and features the trio of musicians who appeared on his debut, On Second Thought (Kabocha Records, 2008)—tenor saxophonist Dayna Stephens, bassist John Wiitala and drummer Jon Arkin. This release also sees the addition of trumpeter/flugelhornist Mike Olmos, bringing added depth and a wider palette of sounds to this assured collection of eight Shulman compositions.

In Shulman's liner notes he discusses the inspiration for the album and its title: theories of convergent evolution, cellular renewal and the meta-patterns of chord structures are all considered with regard to patterns of change. Shulman has clearly given this plenty of serious thought, although the impact of such contemplation is perhaps the reason why there seems to be a lack of spontaneity and emotion within the performances.

"When I Dream" is a somewhat disappointing opener. It begins with a sweet melody line played by Stephens and Olmos, but once Olmos begins his solo the tune seems to lose its way, becoming rather fractured, with Arkin and Shulman both sounding hesitant in their playing. Across the remaining seven tracks the quintet sounds more confident, with Olmos' playing on "Take Notice" particularly strong.

"Spring," the longest and, perhaps, most melodic track on the album, features a fine underpinning performance from Shulman, Wiitala and Arkinm, which extends for the life of the track, while Stephens and Olmos add some beautiful horn patterns on top. The following "4th Street Strut" is a bluesy mid-tempo number anchored by Arkin's swinging drum work.

The material clearly shows Shulman's compositional range and the quintet's technical ability. However, there is no sense that the musicians are taking risks or stretching themselves; everyone seems to be playing well within their comfort zones. There is nothing wrong with an album of well-written tunes played well, but had the band been prepared to take a few chances they could have created a more memorable recording.

When I Dream; Not There Yet; Take Notice; Lullaby; Spring; 4th Street Strut; Chopinesque; Patterns of Change.