By Eric Pettine
December 30, 2004
Sign in to view read count 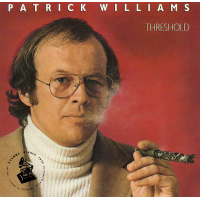 Throughout most of the 1960s, Patrick Williams was one of many composers/arrangers kicking around the NYC studio music scene. In the late '60s he arranged/composed several Muzak-molded LPs ( Heavy Vibrations , Think and Shades of Today among them) that only occasionally hinted at the ebullience and brilliance unleashed on his 1974 Grammy Award winning album Threshold. Perhaps due to his nationally successful composing/arranging credits for both The Mary Tyler Moore Show and The Bob Newhart Show (from 1970 and 1972, respectively), he was able to compose/arrange and finance Threshold , his pet project, that featured big band jazz/rock/classical compositions and stellar soloists that swung like mad.

The album's instrumentation augmented the typical big band setting (saxophones, trumpets, trombones plus rhythm section) of the day with the inclusion of (French) horns and a full string section including the harp. Essentially two main soloists were featured—Tom Scott (woodwinds) and Marvin Stamm (trumpet). Years earlier while still a teen, Scott was great on sax with Don Ellis' Band ( Live in 3 2/3 4 Time ) and Stamm was the featured jazz trumpet soloist with Stan Kenton ( Adventures in Jazz (1961), Adventures in Blues (1962) and Adventures in Time (1963)). But by the late '60s/early '70s in their music careers, both Scott and Stamm were mostly known for their meticulous yet restrictive studio session work. The listener was never really allowed to hear either artist stretch out and take multiple choruses and make emphatic jazz statements. "Threshold" seemed to provide the perfect emancipation from that scene for them at that time while still both in their primes.

Some of the major differences between this albums' music and soloists and that of the big bands (Buddy Rich, Woody Herman and Maynard Ferguson, in particular) of that era, is that unlike the aforementioned leaders, Williams composed and arranged all the music, didn't do any pop "covers," wasn't suffering from "road weariness" and he hand picked exceptional soloists and players specifically for this project. What resulted was some of the most fresh, propulsive, exciting, spirited and original music of that or any following eras in big band music history.

"And on the Sixth Day ...," the albums' opening cut, starts out with a homage to Richard Strauss' "Also Sprach Zarathustra('s)" main theme but quickly segues into a funky flute frolic by Scott. Before you know it, drummer John Guerin (the late/great LA studio ace and along with Scott, co-founder/leader of The LA Express), has a very intriguing (notice the cool "bending" of the tom-tom head) 12-bar solo to set up the next swinging section for Stamm to provide some powerful phrases. As if these great solos weren't enough for one tune, Scott blows his brains out on tenor for a few more choruses to bring the piece to a definitive close.

Next, the mood turns sinister with "The Witch." Chilly, staccato/glissandi strings are set against a claves/snare drum (w/ brushes) rhythmic motive that finally gives way to a hard bop marimba solo (based on the motive) played by Larry Bunker. Stamm takes the final solo that builds brilliantly and swingingly upon the same rhythmic motive with each chorus.

(Note: Williams seemingly has a great affection for, and great skill at, employing motives in most of these compositions that serve to provide impetus for both his music and the soloists.)

The title opus, "Threshold," begins with a Bach-like brass chorale fanfare that is alternatively juxtaposed with and contrasted against a funk/rock theme with swirling flutes (all multi-tracked by Scott). The catchy and infectious 8-note motive is developed and morphed into some beautifully lyrical lines by both Stamm and Scott. Then finally after both choruses, Williams has the entire band wail on his own written development of the the motive. (Try listening to this cut just once.)

The penultimate "A Lady Beside Me," the CD's most commercial and melancholy piece, would've served nicely as background music played during the closing credits for a TV show or movie—perhaps for a possible bittersweet MTM Show episode. Though the 'cello, voice and tenor sax performances alone are worth a couple of listens.

"Mr. Smoke" is the closer whose title could be in reference to Williams himself smoking a cigar on the CD's cover. The real "smoke" begins, however, (after a homey, country-ish harmonica solo by Tommy Morgan in the introduction), with a tour de force Scott flute solo. Things begin to really "light up" with a hard-bopping Stamm on muted trumpet. Tom Scott, on soprano sax, catches furious "fire" as the albums' final soloist. Talk about never repeating yourself and building chorus upon chorus! If you can find a more enthusiastic and engaging Tom Scott sax solo than this one please inform the jazz world at large. The final written chorus played by the full ensemble "burns" up this selection and leaves behind centesimal cinders.

Originally released on vinyl in 1973 by Capitol Records, Threshold was only available for a few years at local record retailers. As far as this writer knows, it can only currently be purchased via Williams' web site .

As the CD's descriptive paragraph at Williams' website aptly states," Threshold is an experience all of its own. For those who do not have it, there is a hole in your bucket."