Home » Jazz Articles » Pat Martino: In Memoriam - Some Recollections of a Legend and Belo...

Pat Martino: In Memoriam - Some Recollections of a Legend and Beloved Friend 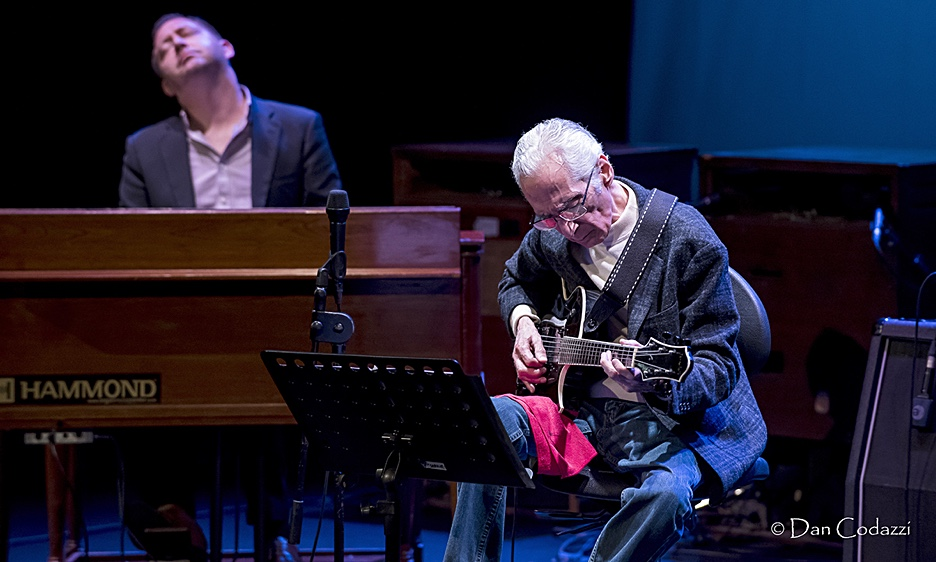 By Victor L. Schermer
November 15, 2021
Sign in to view read count
Note: This is a personal "memoir" of Pat Martino written soon after his passing. It is not a commentary on his music. There are many resources of that kind on All About Jazz (here), across the web and on Pat's website.

I first met Pat Martino after he gave a stunning performance at the then new location of Zanzibar Blue at the Bellevue Hotel on South Broad Street in Philadelphia. That was around 2002. It was the first time I heard him live, and my jaw dropped at his incredible guitar power and precision. I went up to him afterwards and asked him if I could interview him for All About Jazz. He himself had contributed to the website and was pleased to do it. His wife, Aya, whom he met at a gig in Japan, was there and he introduced me to her.

A few weeks later, I rang the doorbell at his home in South Philadelphia which he inherited from his father and lived in until he moved to New York around age 14. The master greeted me with a broad smile on his face and showed me around the house, especially pointing out the guitars he had used and a picture of his beloved mentor, Les Paul on the wall. We went up to his studio on the second floor, and he showed me his state of the art computer, recording equipment, amplifier and his signature guitar. I turned on the tape recorder, and asked him a few of the usual get-to-know-you questions. Then I asked him a question about his theory of guitar fingering which makes it easier for guitarists to do complex chord changes and for which he had made instructional videos. At that point, he talked in depth about his theory, which is not only about chord changes, but about the twelve hours of the clock, the four seasons, and the mysterious science of numbers.

I was stunned, because Pat related the guitar fingering to the whole universe, and had sound arguments for it. He later told me of his fondness for the Pulitzer Prize-winning book Godel, Escher, Bach: An Eternal Golden Braid (by Douglas Hofstadter, Basic Books, 1979) and his encounters with the great architect of the geodesic dome, Buckminster Fuller. As we talked further, it became apparent that Pat was a profound thinker as well as a great guitarist. He had a sense of the grand design of the universe and its implications for music, psychology, and metaphysics. Some of it is discussed in his autobiography, Here and Now (co-written with Bill Milkowski, Backbeat, 2011), Somehow, exploring these ideas made us feel closer and became a basis for a long friendship.

At other times, he shared with me his thoughts about life, and about his amnesia from the aneurysm surgery. He said that after a period of depression, he began to see his loss of memory as an opportunity to live more in the present moment! Who knew? What a brilliant and life-changing idea. He added that in having to learn everything anew, he felt like a child. And he learned that childlike spontaneous play was the right way to live. I felt as if I were getting free therapy from him, and as a psychologist, I believed his ideas could be applied to the pain and suffering in all our lives. They also helped explain his exceptional resilience in pursuing the guitar again at a time when he could barely recall what a guitar was. I began to feel a deep love for Pat, the kind of love you have for a close friend or family member. Every time we got together after that, we would hug each other, and getting hugs from Pat were among the most treasured moments of my life.

Despite his occasional temper, which came either from his Italian side or resulted from the brain damage, Pat was brimming with love. He totally loved Aya, despite some of the difficulties they had, and he was very thoughtful to just about everyone. He could overwhelm people with love, like the time he and Aya brought the staff of the Iridium club some special nutritional plants as gift. (Aya is a master of holistic nutrition, which played a role in Pat's recovery from a lung condition.) As an act of love he taught Aya to play the guitar, and they sometimes performed together at places like the World Cafe. He was always ready to help people. He once got an email from a guitarist in Seattle who was suffering from a serious illness. He didn't know anything about the guy, but when he did a gig in Seattle, he got together with him. He was very close to his one-time saxophone cohort, Eric Kloss, and when Kloss was going through difficult times, Pat was there for him.

People loved Pat back. His love generated love all around him. When Pat recovered his playing after the aneurysm, the actor, Joe Pesci, came to hear him at the Blue Note in New York. After Pat's performance, Pesci came backstage to say hello. Because of his memory loss, Pat couldn't remember him. Pesci asked him what his favorite drink was. Suddenly, it all came back. They were bosom buddies when Pat was playing the clubs in Harlem and Pesci was a singer before he became an actor. After that, they stayed friends, and Pesci participated in the film Martino Unstrung when Pat and Aya visited him in Los Angeles.

When the film, Martino Unstrung, conceived and directed by the English film maker, Ian Knox, came out, it showed me a different side of Pat, his dramatic side. He participated in the film like a seasoned actor, and it also disclosed a flareup with a recording engineer, which he later apologized for. I would say that Pat had an Italian machismo side to him. He was all business, and could be very aggressive in his business dealings. I frankly didn't like that side of him. But it was one of the reasons his performances were impeccable. He was a perfectionist when it came to music, not the spontaneous, innocent child. But he also was a practicing meditator, and he once told me that when he was performing, he had "out of body" experiences. He said he was up near the ceiling watching himself play! I began to get the idea that he was a Buddhist. I don't know if he ever practiced Buddhism, but he did seem to have total concentration in the present moment, which is what Buddhists strive for.

At the time of the film's release, Ian Knox came to Philadelphia to help launch the film. They had a preview showing of the film in a conference room at the University of the Arts. It was an honor to meet not only Knox, but to shake hands with Pat's neurosurgeon, Dr. Fred Simeone. Simeone saved Pat's life by removing 70% of Pat's temporal lobe. You have to be very detached, calm, cool, and collected to look at a scan, open the skull, and remove a big part of a person's brain, no less the brain of one of Simeone's favorite jazz musicians! I met Dr. Simeone on two occasions, and he proved to be a gentle warm person, and he loved Pat and his music. That may be one reason that Pat's father insisted that Pat come home to have Simeone perform the surgery. In any case, I was grateful for the opportunity to meet Simeone and Knox and get a preview of the film. Pat was like a magnet, drawing the right people to him at the right time.

The film has clips with great musicians like Red Holloway and Santana who were influenced by Pat's playing, but also were touched by his human qualities. I spoke a number of times with guitarist John Mulhern, who was living with Pat in LA, and who took him to the hospital when Pat had the seizure that disclosed the aneurysm and led to the emergency surgery. Mulhern later helped Pat to regain his familiarity with the guitar. All this is to say that through Pat, I got to know many exceptional people. Pat drew many wonderful people around him, and it was a blessing to meet some of them. I got to know his manager, Joe Donofrio. Joe and I would share about Pat's wonderful qualities that I've mentioned here. When Pat asked me to write the liner notes to his album, Remember: A Tribute to Wes Montgomery (Blue Note, 2000), I felt honored. To be valued by Pat for a task like that felt like God stepping in and saying, "Good job!" I don't know what God thought about my liner notes, but I do know that's what God may have said to Pat after he entered the pearly gates.

I love you Pat. I'm grieving over your passing, but I'll always have the memories and my collection of your recordings to listen to and reflect upon. God rest your beautiful soul.