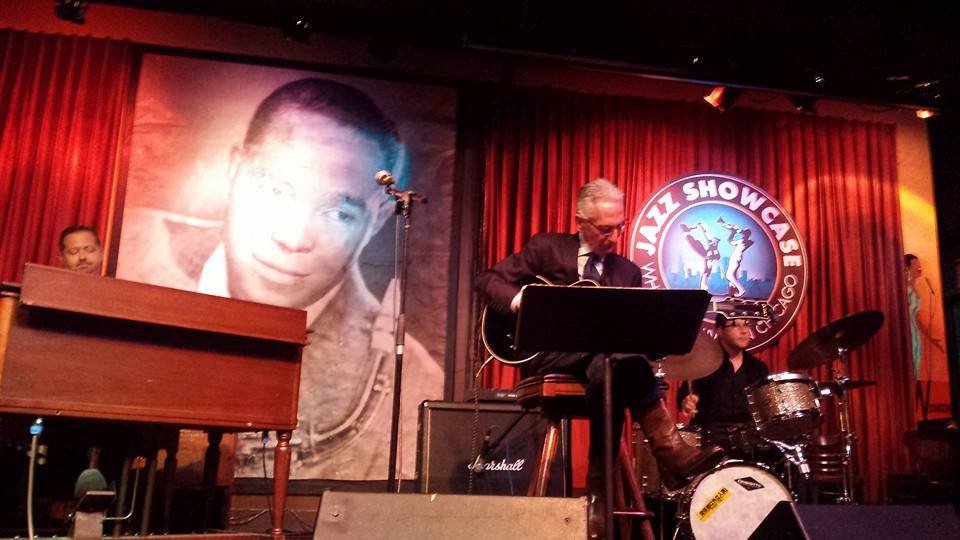 By DOUGLAS GROOTHUIS
September 15, 2015
Sign in to view read count
Jazz, at its best, inducts its own into aesthetic alliances, some long-lasting, others fleeting, but all meaningful. Meaning is a matter of mortals finding something of value, something worthwhile. When two or more agree on meaning—especially in matters of music—the fellow-feeling may run deep and true. Pat Martino, jazz guitarist extraordinaire, along with a good friend helped this happen to me in the summer of 2012 in Chicago at The Jazz Showcase. This event is sweetly and securely lodged into my memory. Perhaps the short story will ring true and trigger a certain grace of understanding and experience.

I half-jokingly put up a one-word prayer on Facebook in the spring of 2012, "Dear God, please let me see Pat Martino before one of us dies." The jazz mastery of this man emanated from the many recordings I had heard. (I have nearly all of them.) But that was not enough. Jazz is improvisational. Pat, a deep thinker on jazz theory and even its metaphysics, has always emphasized being "in the moment" in his playing. It is not any moment, but a jazz moment, a meaningful moment, not simply the passing of time. Seeing him live would be something to treasure.

My friend bought us airplane tickets to Chicago to experience Pat Martino live at the legendary Jazz Showcase. We arrived early. As we entered I heard the band testing the sound system. We had arrived where we wanted to be: Jazz Land. My friend and I then bantered with the endearingly cantankerous owner. As soon as the doors opened we went in to claim our front row table.

More than a venue for jazz, the Jazz Showcase in Chicago is a museum—filled with posters and signed photos going back fifty years. Bird, Trane, Monk, Duke, Prez, and Miles seemed ready to jam with the featured musicians there. My friend bought us tickets and we experienced legendary jazz guitarist Pat Martino. From the front row, I took in two sets for both nights of his engagement. A number of tunes were repeated, but, of course, each one was different. Pat has worked in the trio setting for much of his career. Pat Bianchi on organ accompanied with a deep sense of harmony, melody, and timing. The drummer, a younger man, listened and responded flawlessly. The other listeners were enraptured as well, some of them guitar players themselves. I am sure there were few jazz neophytes there; but they could not remain neophytes after an hour and a half of Pat Martino live.

The intimacies develop in the rest of this story. During the break between the first and second sets of the first night of Pat's stay at the Jazz Showcase, Pat lounged awhile at the bar. I had greeted him before his set, but wanted to converse a bit more. "Can you play 'Sunny'?" I asked, since that was one of my favorite of Pat's covers and because I had just picked up my golden doodle puppy of that name the day before in Denver. Pat said softly, "This band doesn't play that." But he then glanced up and said slyly, "But you never know." That was fine with me. My cup was already overflowing.

I returned to my front row jazz festival for another take-it-to-the-grave performance. Following a standing ovation after the last number, Pat turned to his ace organist Pat Bianchi and said one word, "Sunny?" Bianchi nodded. Pat turned to his drummer, Carmen Intorre, and asked "Sunny?" Intorre nodded. After Pat's countdown, they then took off on a swinging and joyful rendition of "Sunny." Pat did the same thing for his final tune the next night. I don't know if "Sunny" thereafter entered their set list, but it remains in my soul forever. Pat did the same time for the last number of his last set, this time pointing to me before playing it. I am not ashamed to say that I cried tears of joy. But why did I?

I wept because of the confluence of art and heart. Pat Martino plays from a place of deep music theory, and that mindfulness gives wing to heartfelt improvisation. Pat calls it "being in the moment" with his instrument and as an instrument. He finds that moment because of all his learning and playing of the past, and because of the gift of music itself, a gift that is far more real than any musician can either harness or domesticate. Music like this alone can produce tears. But there was more.

Jazz, by itself, cannot be given all the credit for musical kindness. It took a certain kind of man to make it real in the moment. Pat was that kind of man. But jazz set it all up—put the players on the stage and the enthusiast in the audience. Aficionados of jazz have a kinship, since jazz is a rare jewel that too few find luminous. Jazz is, at its best, relational. It moves from person to person, from instrument to ear, and not from product to consumer. Jazz, as one of life's many gifts, can open doors to a treasury of free and freeing fellowship where art and heart meet and kiss.