By Brandt Reiter
September 9, 2007
Sign in to view read count 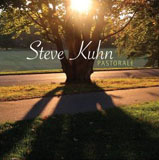 Though he's been an inimitable sideman for jazz legends like John Coltrane, Stan Getz and Arts Farmer and Blakey and though he's been leading his own first-rate groups for decades, Steve Kuhn has never become a household name. Like his frequent (and equally idiosyncratic) collaborator Sheila Jordan, he's better known abroad than here, both in Europe and Japan—which is where this new disc comes in. For Pastorale, actually, is not new—it's the overdue American release of a superb trio session done five years ago for the Japanese label Venus, under the title Waltz (Red Light). That Sunnyside has taken it upon itself to release it here and at a reasonable price (until now, it was only available as a costly import) is a terrific service to both Kuhn and his listeners. The only complaint is, what took so long?

Kuhn's dabbled in many forms over his forty-year career but the one that seems dearest to his heart is the classic bop trio, as defined by Bill Evans in the early 1960s. (In Getz's group, Kuhn played alongside Evans' genius bassist Scott LaFaro, and the experience deeply marked him.) Evans, in fact, can be heard all over Pastorale: in the close adhesion of the players; in the disc's lovely, swinging lyricism; and in the easy, forward flow of the music. The presence of Eddie Gomez, who logged a decade with Evans after LaFaro's tragic death, only brings the late, great jazz idol further to mind.

And yet, as strong as the Evans influence is, it's a touchstone and nothing more; on Pastorale—as always—Kuhn remains steadfastly himself. Even at his most sweepingly romantic—as on Walter Donaldson's "I'll Take Romance or the wistful Kuhn title composition which closes the disc—Kuhn never slips into sentimentality. (Indeed, few other pianists could invest Henry Mancini's "Charade with this much melancholy and not have it drift into shameless self-pity.) And the joyous, tripping swing that floats standards like Irving Berlin's "Remember and Jack King's "How Am I To Know has a plush ebullience that's all Kuhn's own.

Anyone who has seen Kuhn live knows the jaw-dropping fireworks of which he's capable. Pastorale, in contrast, is a quiet disc, never rising above a mid-tempo lilt. But it doesn't have to. Listen closely and all the same Kuhn pyrotechnics are subtly there: the abrupt tempo changes within a single measure; the sudden plonking of a sole, indispensable note; the razor-sharp harmonic intelligence; the formalist's attention to space and dynamics; the deep dollops of blues; the tossed-off, tightly crunched flourish. And, no surprise, he's exquisitely matched here by old hand Gomez, whose solos are models of graceful conciseness and veteran skinsman Billy Drummond, who punctuates and colors with wondrous elegance. In sixty minutes there's barely a wasted note and the three musicians play with the telepathic rapport that's both expected and essential in this kind of work.

Charade; Remember; Years Later; Once Upon A Summertime; How Am I To Know?; My Buddy; I'll Take Romance; I'm Glad There Is You; Pastorale.