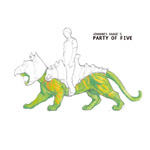 Led by guitarist Johannes Haage, Party of Five is "loosely based in Berlin. As well as leading the quintet, Haage composed all four pieces here. If they have a fault, it is that they are rather overwritten; there are sections where the players are given space to explore the written themes, and it would have been good to hear more of these. For instance, the jerky, quirky main theme of the opener is reiterated rather too often, breaking up the flow and giving a unnecessarily disjointed feel to the piece.

Haage shows himself to be a fluent and inventive mainstream guitarist, as yet without any particular distinguishing features. Richard Koch on trumpet and Philipp Gropper on sax are a particularly effective pairing—as on the closer, "Jogg, where they are allowed space and time to interact. I was left wanting to hear more of them and less of the written ensemble playing.

As with many debut albums, the music here is rather a ragbag of different styles and there seems to be a desire to put everything in the shop window at once, rather than allowing time for things to develop at a more organic rate. Nonetheless, it is fine as a first album; the group's next (promised later this year on Shoebill music) will certainly be worth checking out.

Visit Johannes Haage on the web for sound samples and purchase information.