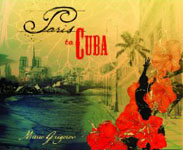 Pianist/composer Mario Grigorov's Paris to Cuba conjures up a number of images before a single note has been heard. Both Paris and Cuba are culturally rich and have been major players in the development of jazz, but the two are often portrayed in very different ways: one, often celebrated as a dream destination, filled with beautiful people; the other relegated as a place people have risked their lives to escape; one regarded as a city full of high fashion donning, wine sipping, dog lovers; the other marred by poverty and communist rule.

With Paris to Cuba , Grigorov suggests that music will ultimately reveal its own truth even in the midst of preconception, expectation or scrutiny. So how does the journey from Paris to Cuba sound? With Grigorov at the helm and serving as the album's tour guide, it sounds beautiful.

The recording's 10 original tracks feel like a musical score for a summer vacation. Grigorov uses his background in film scoring to breathe life into his music, turning it into something that stimulates the imagination. Not quite jazz or classical, but a little more than world music, this album takes a little from each.

Standout tracks include "Cuban Sun, Cuban Soil"—which does, indeed, sound like a walk under the Cuban sun—with Grigorov performing on a Farfisa organ; "Before She Walked Away," a slow to mid-tempo tune which features Ben Butler and Jeff Hill's beautiful guitar work; and "I See," "Every Little Movement" and "Snake Eyes," a musical trifecta that spotlights Melissa Newman's sultry vocal accompaniment.

Although composed and written by Grigorov, every musician contributing on the recording adds something special to make the whole album work. It's a great opportunity to see into a composer's mind through his music—and the way Grigorov writes and performs on Paris to Cuba, it seems that he welcomes the company.

Bridget A. Arnwine is a member of the Jazz Journalists Association.