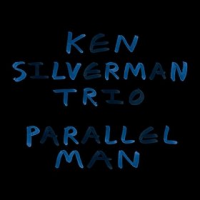 At first glance guitarist Ken Silverman's Parallel Man appears to be an album having an identity crisis. It seems lacking a unifying theme and the sense of adventure that marked its predecessors. A careful listen, however, reveals another explorative dimension, one that tries to find the core commonality among seemingly disparate genres. From the western swing of "Little Ditty" to the soulful blues of "Odyssey In Blue" to a Sergei Prokofiev composition these performances are all enveloped with an intimate lyricism.

Silverman's warm guitar lines glow within the darkly hued ambience of the "Visions Fugitives, #1." His strings resonate against the subtle rumble of his band mates endowing Prokofiev's contemplative piece with an understated spontaneity. Bassist Sam McPherson launches into an eloquent solo that melts into the closing sparse and pensive bars.

The intriguing title track opens with overlapping, dramatic patterns made up of expectant and haunting vamps. Silverman alternates single plucks and strums as he ushers in a melodic ensemble sound that creates a thrilling change in mood. His distorted tones bring forth yet a third atmospheric backdrop made up of angular phrases and otherworldly rhythmic flourishes.

Another shared thread among the various tunes is Silverman's unique instrumentalism and individual style. His playing is agile without being showy, cerebral while eschewing abstruseness. Even on the funky "Elbow Grease" his swaggering interpretation simmers with reserved passion is peppered with inventive ideas.

Parallel Man, with its duality, is certainly a change of direction in Silverman's artistic development and this is not, necessarily, regretful. On one hand his new disc is polished, sophisticated and accessible and will introduce a different audience to his work. On the other, the absence of bold improvisational rigor may disappoint some who are familiar with his past releases. Nevertheless, this is an engaging record full of intelligent ideas and charming melodies that is a refreshingly honest statement by a singular and superb musician.