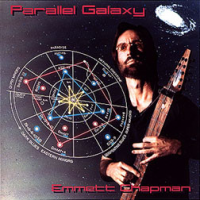 Inventor/designer/player of the famous tap instrument, the Stick offers this re-release of his debut 1985 release. It is a peek at early Stick that is upbeat and playful. Joining Chapman are Bruce Gary on drums, Josh Hanna on treated McFerrin-scat-sing vox effects, and one track featuring Dan Chapman on harmonica. I heard that Bela Fleck and the Flecktones thing, a touch of jazzy blues romp, old Les Paul diddlings, and that Greg Howard/Will Ackerman acoustic mellowness.

Chapman offers original material and covers such tunes as “Eleanor Rigby”, John McLaughlin’s “A Lotus on Irish Streams”, and jazzy fusion version of “My Favorite Things”. I suppose, just for its straight ahead, jazz-inflected, Fleckian bluegrass aura — “Back Yard” gets my vote as best cut for radio play. Next best cut is “My Favorite Things” for its inventive reworking of an old standard showtune.

I find this an interesting listen but if it wasn’t extra-valued as Chapman’s debut Stick release I may have passed on it due to it’s being a “just look at all the stuff my Stick can do” type of release. Reaching out to a wide variety of listeners in genre and stylings in a showcase effort weakens its musical impact on these jaded ears of mine. Remember all those MOOG synth, show-me releases that flooded stores? Very few held together well. Chapman’s 1985 release does hold together well but it is not remarkable in 1999's myriad of fine Stick work already out there.

Reprinted with the permission of John Collinge and Progression Magazine .