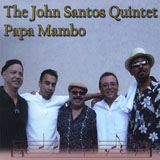 In the musician's world, the end of one project signals the start of a new journey towards a unique musical destination. When percussionist John Santos and the Machete Ensemble bid the world farewell in 2006, it marked the end of an era in Bay Area Latin jazz. After more than twenty years with the large ensemble, Santos embarked in a new direction, forming a quintet. The group's first album, Papa Mambo, narrates the trip into the future, presenting a mature and unified approach.

The Quintet demonstrates a creative spirit and high-level musicianship on several arrangements. The band takes the popular song "Guararé back to its Changüi roots, creating a perfect feature for Orestes Vilató's bongo skills. As the momentum builds, flautist John Calloway and trumpet player Ray Vega trade lively improvised lines. The band provides a powerful drive to Vega's "Second Wind, supporting the subtle melody with a firm rhythm section. Pianist Marco Diaz storms through a fiery improvisation, leading into Vilató's inspired timbale solo. The band brings a personal passion to each of these interpretations, displaying a wide musical knowledge.

Many tracks utilize additional musicians, bringing a further depth to the album's overall sound. Santaria rhythms form the foundation for the group's tribute to Cachao on "Papa Mambo. Vocalist Jerry Medina provides strong clarity to the song, while Vega's muted trumpet explores the song's harmonic territory. Sierra's distinct bass groove opens the rumba, "Para Que Niegas, giving way to a delicate vocal from Orlando Torriente. After an extended trumpet statement from Vega, Torriente demonstrates his power as an improviser until Santos ends the song with a fiery conga solo. These musicians support the quintet, and allow them to apply their creative tools on a larger scale.

Santos' quintet maintains a high standard on Papa Mambo, exploring new possibilities while focusing on a sharply defined musical vision. The band's songwriters respect the music's history, while integrating their own creative voices. The core quintet approaches the combination of past and present with both reverence and daring, which evolves into a highly individual statement. The additional musicians never deviate from the tone set by the quintet, but instead solidify their concept. This album may represent the start of a new journey for Santos, but it promises a rich future with an exciting destination ahead.