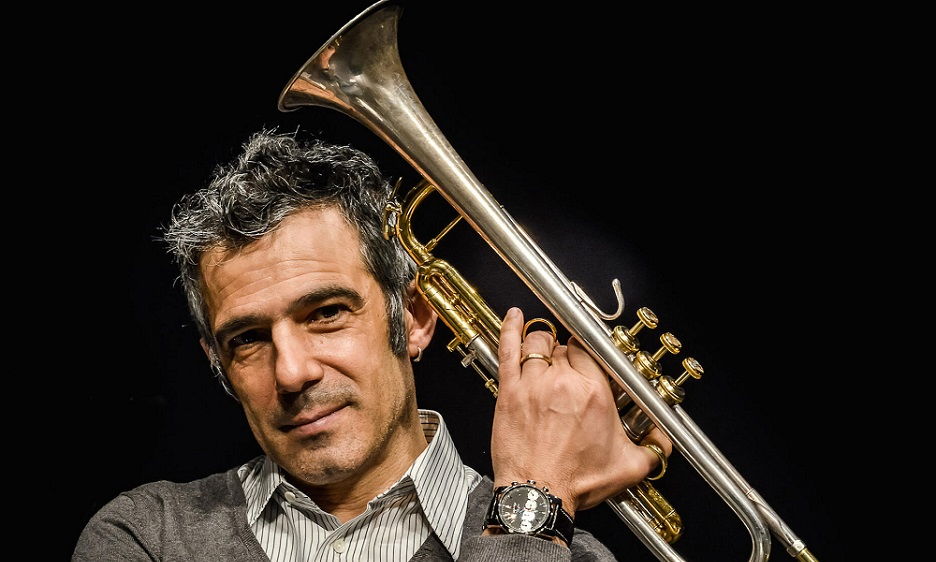 By Nathalie Tamara Freson
October 2, 2022
Sign in to view read count
Paolo Fresu—a multidimensional artist whose creative overdrive has shaped the Italian jazz scene for almost forty years. With definite hints to Chet Baker and Miles Davis, Fresu has honed a particularly mellow, velvety sound which is absolutely compelling. Even when he tackles coarser, more upbeat tempos, he captivates his listeners with his original approach, switching between trumpet, muted trumpet and flugelhorn, and sometimes employing electronic effects. Indeed, using technology in a creative process, as Paolo Fresu occasionally does in live performances, allows him to enhance his sound and attain effects which he could not otherwise reach through breath alone.

You will often see Fresu sitting crossed-legged as if in a yogi pose; yet do not be fooled by his gentleness and elegance for it is his deep understanding of the musical world that transpires throughout his lifelong work and has propelled him to the forefront of the international jazz scene. Primarily a jazz trumpet and flugelhorn player, Fresu has expanded his repertoire into multiple genres and a great diversity of projects. It is precisely this all-encompassing outlook that makes him such a well rounded musician.

Fresu, however, is a man of many hats. He is an educator, whose Millinote and Note Elementari projects were founded to raise musical awareness in kindergartens and primary schools. And for the last decade or so, Fresu has worked as a producer under his own label, Tǔk Music, producing not only his own albums but also promising artists such as Dino Rubino and Marco Bardoscia , with whom he recorded the Chet Baker tribute album Tempo di Chet (2018). With Rubino and Bardoscia, Fresu has also formed a trio playing music inspired by the poet Lawrence Ferlinghetti. Yes, Paolo Fresu's list of achievements is indeed impressive. In fact, keeping up with this larger-than-life musician's pursuits proves to be an ambitious hobby.

With over eighty albums as leader or co-leader to his name, more than 2,500 concerts performed worldwide and collaborations with the likes of Enrico Rava, Dave Liebman, Carla Bley, Dhafer Youssef, Richard Galliano, Ludovico Einaudi and Lars Danielsson, amongst many others, Fresu is widely considered as one of the leaders of contemporary jazz. His achievements have seen him garner numerous awards, including the prestigious Django d'Or prize.

Fresu's approach to music is universal in the sense that he breaks boundaries, touching on all sorts of musical styles, not only jazz but drawing inspiration from Baroque or folk music.

Born in Sardinia, Fresu has a strong sense of belonging to the island, which, in turn, has had a significant bearing on his music. Just as Sardinia has been subjected to various cultural influences over the centuries, so too, Fresu's work is a multi-threaded tapestry.

Fresu may be fundamentally Italian, and inherently Sardinian, and yet, he is cosmopolitan in his choice of partnerships, leading the listener on a variety of musical journeys; astounding us every time. Playing with pianists as diverse as Jan Lundgren (their album Mare Nostrum III (ACT, 2019) offers beautiful, delicate interplay), the soulful Omar Sosa or the flamboyant Stefano Bollani can only result in very different outcomes. However, it must be stressed that with each and every one of his collaborations, Fresu is high on emotions, offering a deep lyricism and soulful phrasing. Similarly to singing, he has mastered his breath to perceptible nuances to exteriorise universal emotions, and what better way to utilise the vital force of breath than to connect with the audience?

Essentially a jazz player, Fresu takes his instrument to the fullest of its potential, clearly demonstrating that the trumpet can easily be adapted to multiple genres— his renditions of Monteverdi's "Si dolce è il tormento" and Handel's aria "Lascia ch'io pianga" are fine examples of his versatility. His adaptations of more popular songs such as Lucio Dalla's "Caruso," Luigi Tenco's iconic song "Vedrai, Vedrai," the Sardinian folk song "No Potho Reposare" or the partisan song "Bella Ciao" (originally a protest folk song) are no less captivating. But Fresu also lends his instrument, and breath, to different art forms altogether, such as poetry reading, theatre or dance. Everything is connected in Paolo Fresu's world—the past to the present and the present to the exciting uncertainty of the future.

It is difficult to remain untouched by Paolo Fresu's playing. Whether leading his Devil Quartet, trios, duos or performing solo, his sensuous tone speaks to a broad church of listeners.

His breath and sensibility open up a whirlwind of images and textures and evoke a gamut of emotions. His playing is fluid, pensive, intimate, spirited at times, but can be suave ("You Can't Go Home") or even languorous ("Blue in Green") too.

However, what is most striking with Fresu is his overall elegance and the gracefulness that infuse his work. His tone can be penetrating and yet, he demonstrates such sobriety and a gentleness through his performances and renditions that is highly addictive. He is certainly not showy; and more often than not, the musician that he is turns into a poet.

His albums are often profoundly touching in their choice of melodies and compositions, colourful and soul-crushing like life itself, but more than that, his work is almost philosophical in the sense that there is a recurrent underlying theme which is always present—that of Fresu's passionate quest for the purity of the sound.

He has this uncanny ability of blending his body language with the music while holding onto the note. The physical and the emotional realms are blurred while the note remains suspended in the void; emphasising the stillness around it.

Indeed, with Fresu, even silence has sound.

For Fresu, emotions are raw and real. It is all about authenticity and one comes to understand that every sound has a story and is part of a continuum. His playing can be haunting, melancholic, yearning, constantly searching. And like Chet Baker, he expresses torment and human fragility with great humility; his interpretation of "Caruso" with Uri Caine is simply heartbreaking.

Paolo Fresu is essentially an explorer. Apart from jazz, he examines and revisits boundaries, putting his own spin on melodies that are remote from anything that resembles jazz. It is undeniable—Fresu craves the richness of human creativity and constantly seeks the bonds that connect us as humankind.

The message is clear: it is that mesh of cultures and ideas, the dialogues that are created through the collectivity, that create a better society and a better world. In that sense, Fresu is the quintessential jazz musician insofar as, from its beginning, jazz evokes a willingness and desire for unity. Jazz is a universal experience; there is something in it for anyone who is willing to listen and learn; it is also a dynamic and creative genre that hints at the attributes of the human condition and gives it a voice. And Fresu's music is irrevocably humane, with all the intricacies it implies.

It is precisely his avid curiosity and the synthesis of intellect and emotion that makes Paolo Fresu's music that of the world —it tells its story; it is in continual evolution and for some of us, it even changes our world.

Opening the infinite doors of creativity, Fresu represents a tapestry of the world in itself, wherein music forms a perfect constellation.

That is his legacy.

I'm a writer from Tel Aviv.