By Dan Bilawsky
November 24, 2013
Sign in to view read count 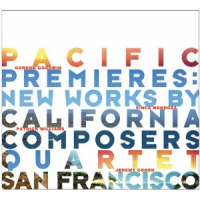 Gone are the days of the insular string quartet that turns its back on anything and everything outside of the classical canon. In many respects, the world can thank the venerable Kronos Quartet, which celebrates its fortieth anniversary in 2013, for opening eyes, ears and minds to the fact that the string quartet is just like any other instrumental assemblage, capable of crossing stylistic boundary lines and charting new courses. That groundbreaking ensemble explored—and continues to explore—music of all shapes and forms, and it blazed a trail for other string foursomes to follow. The open-minded mentality that was and is a sine qua non for its success has seeped into many a younger group, from the forward thinking, more jazz-oriented Turtle Island String Quartet, which has been making thrilling music for more than a quarter of a century, to Quartet San Francisco, the ensemble responsible for bringing this music to life.

Goodwin, Mendoza, Patrick Wiliams, and the founder of Quartet San Francisco—violinist Jeremy Cohen—all contribute new pieces that are chock full of life. Some numbers immediately click with the ear, mind and body, like "Oakland," the hip- and-spry opening movement of Goodwin's "California Pictures For String Quartet," and Cohen's sly-and-dramatic "Guamba." Others, like the pensive "Contemplation" from Goodwin's "Three Stages For String Quartet" and the charming "Towner" from Mendoza's "String Quartet No. 1: Funky Diversions In Three Parts" are slow burns that reward repeated listening.

Blurred lines abound here, as jazz, funk, classical and Latin influences merge and fuse in different ways in different pieces. Mendoza's work is often more extroverted than one might expect, as demonstrated on his tribute to the Brecker Brothers ("Mike And Randy"), while Goodwin's work often goes the other way, as he avoids the in-your-face elements that have made his Big Phat Band so popular. Both men, however, live up to expectations when it comes to the quality of their respective writing.

It's hard to know whether the ensemble or the music should get top billing here, but both deserve high marks. Few string quartets are operating at this level and few composers write such compelling music for groups like this.