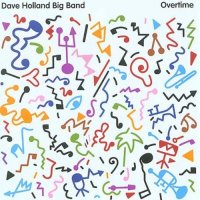 Overtime, the second release from the Dave Holland Big Band, is another impressive work by the Grammy-winning large ensemble. Assembled around the legendary bassist's working quintet, the thirteen-piece unit explores the greater harmonic implications of the leader's creative compositions, without sacrificing the special rhythmic character the smaller group possesses. Built from the bottom up upon the rock solid foundation of Holland's great big bass sound with Billy Kilson's atypical drumming and Steve Nelson's vibraphone and marimba (in lieu of piano) contributing greatly to its unique sound, the aggregation has a distinctive quality that is simultaneously classic and cutting edge.

Holland's "Monterey Suite," a four-part suite commissioned by the West Coast festival, takes up the first half of the date. The opening "Bring It On is a delightful fanfare that demonstrates the band's lush unified sound and features exciting swinging statements by tenor saxophonist Chris Potter and trombonist Robin Eubanks. The second section, "Free For All, showcases the rhythm section (with a beautiful bass introduction reminiscent of "Conference Of The Birds and solos by Nelson and Kilson) and again Potter. The third part, "A Time Remembered, is a poignant paean harmonically evocative of Thad Jones and Gil Evans, featuring trumpeter Alex "Sasha Sipiagin and baritone saxophonist Gary Smulyan. The suite concludes with "Happy Jammy, a fun, funky outing showcasing Antonio Hart's soprano and Holland's bass over the vamping horn sections and relentless rhythms.

"Ario, from Holland's 1998 quintet release Points of View, spotlights trombonist Jonathan Arons and altoist Mark Gross in an exotic environment enhanced by Nelson's marimba. "Mental Images, a Robin Eubanks composition from his 1994 JMT release of the same name, is a dramatic piece featuring Holland, Nelson (on vibes and marimba), the composer on trombone, and his talented younger brother, Duane Eubanks, on trumpet. Duane Eubanks is also out front, with trombonist Josh Roseman, on the concluding "Last Minute Man, a contemporary excursion by Holland with a hip-hop flavor influenced by Missy Elliot, Busta Rhymes, and Snoop Dogg.

The majority of big bands these days seem to be preoccupied with attempting to recreate the great sounds of a bygone era. Holland and company demonstrate a healthy respect for the tradition, but Overtime shows that is the future of the genre that interests them most.