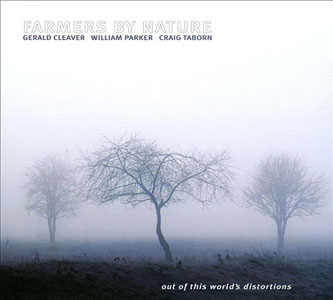 Sometimes it feels like there's a glut of piano trios out there, so it could be argued that it takes something special for one to stand out. Whatever that special something might be, these guys have got it. Pianist Craig Taborn, bassist William Parker and drummer Gerald Cleaver have the ability to produce work that's never stale. But saying that they always come to play doesn't do them justice: individually and collectively, they have a knack for carving out their own space, and this program makes that point in no uncertain terms.

The trio's been together for four years, and that experience comes out in the opening "For Fred Anderson" which, with its grace and solemnity leaves no doubt about the trio's sadness at Anderson's loss. But what makes that feel even more significant is the way in which all three players work with the kind of unassuming reverence which is easily talked about but nowhere near as easily struck.

"Out Of This World's Distortions Grow Aspens and Other Beautiful Things" highlights a trio defined by subtlety, but there's also some deep listening going on. Parker is at a stage in his life where two notes from his bass can carry authority, while Taborn's shading is the work of a man alert to worlds of possibility. Cleaver's also a musician capable of extraordinary subtlety, and the result of this collective effort is a three-way discussion of a highly cerebral but earthy order.

Parker picks his bow up for "Cutting's Gait." In a sense, the music indicates how these guys tap into something so deep they could probably maintain such quiet intensity for hours. Up to a point, this renders the physical means by which the music is produced irrelevant, but there should be no doubt about the music's underlying humanity, especially as it's this very quality that keeps it well outside of the pack and inhabiting an expansive yet highly personal space.