Rick Wakeman and The English Rock Ensemble: Out Of The Blue

By GLENN ASTARITA
March 7, 2015
Sign in to view read count 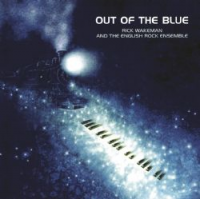 Rick Wakeman (Yes, Strawbs) and Keith Emerson (The Nice, Emerson, Lake & Palmer) were among the primary catalysts of the infant 70s progressive rock scene and helped elevate the genre into a viable art-form, steeped in multifaceted electro-acoustic components with a concentrated focus on superior musicianship. With dazzling virtuosity and heavy use of Moog synths, complementing his use of acoustic piano, Wakeman continues to apply his magic within various prog-oriented flavors and shapes.

Wakeman's symphonic prog rock insignia yielded the largely applauded, Six Wives of Henry VIII (A&M, 1973) and Journey to the Centre of the Earth (A&M, 1974) albums amid other solo projects and aggregations, including this remastered reissue of his affiliation with The English Rock Ensemble, captured live in 2001 at a Buenos Aires theater. Augmented by a sterling sonic production, Wakeman employs his keyboardist son Adam to lend a hand or two, complementing the ensemble's agile and brazen rock jaunts, fronted by lead vocalist Damian Wilson's resounding delivery, often flanked with majestic attributes and powerful intonations.

The keyboardist revisits old favorites such as the opening track "Excerpts from Journey To The Centre Of The Earth," that commences with a thumping rock motif, transforming into the familiar stately thematic overtures and overtly staged theatric sensibilities. Wakeman's polyphonic keys cast whimsical qualities into the mix, countered with grandiose voicings and Ant Glynne's streaming electric slide guitar lines and psychedelic hard-rock soloing in choice spots. Even though the leader revisits many of his signature comps such as "Catherine Parr" and the spiffy synth and keys concerto "Jane Seymour, both culled from Six Wives of Henry VIII, the group's moveable wall of sound imparts an air of excitement, duly bringing the live music effect into your listening environment.

The ensemble concludes the festivities with the audience pleaser and classic Yes piece "Starship Trooper/Wurm," culled from the band's simply titled third album The Yes Album (Atlantic, 1971), which marked keyboardist Tony Kaye's final recording with the group, predating Wakeman's membership on the follow-up release, Fragile (Atlantic, 1971). Here, the ensemble honors the original comp with nobility and bravado amped by Wilson's authoritative vocals, streaked with the dreamy melodic hook, embedded within gleaming beauty and a sinuously executed prog rock climate. Moreover, Wakeman's extended Moog soloing and intensifying dialogues with Glynne tenders an in-your-face vibe towards closeout. Thus, Out Of The Blue is one of several newly mastered 2014 Wakeman reissues by Esoteric Records that should provide a source of interest for longtime fans or for those unfamiliar with the artist's post-Yes body of work.

Excerpts from Journey to the Centre of the Earth; Buried Alive; Jane Seymour; No Earthly Connection/The Prisoner; Catherine Parr; The Visit; Return of the Phantom; Starship Trooper/Wurm.